When in In Iran, if you are not ignorant of your surroundings, you might happen to see a child carrying a small box of colorful envelopes; some of them even have a canary perching on the box. Foreign visitors usually wonder what these kids are trying to sell and what the role of the little bird is?! These children are selling nothing but poems of the most popular Iranian poet Hafiz (aka Hafez). 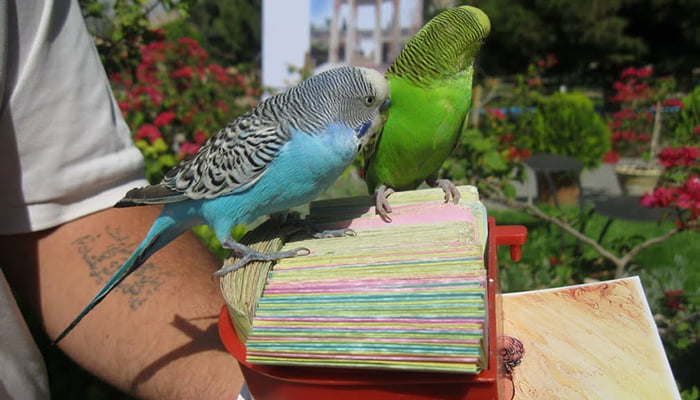 These colorful envelopes are actually a kind of fortune-telling which Iranian call “Fal-e Hafiz”, meaning omens of Hafiz.

How Do They Do It?

When one has a question in mind or is trapped in a dilemma and does not know what direction to take or wants to know what the result of a particular work will be in the future; they seek the answer from the poems of Hafiz. The ones who buy the poems, before picking the envelope or having the canary picking it for them, ask their questions in their mind without letting others hear it.  Following that they pick a poem and try to find their answer by reading through the verses. However, it is not often easy to interpret the poem and find the answer one is looking for.

Buying an envelope on the streets is not the only way to consult Hafiz since almost all Iranian households own a book of Hafiz “Divan-e-Hafiz”.

In order to find out what future has in store, again one would have to make their request in their mind, close their eyes and open the book to a random page. The first poem the eyes are laid on is the fortune.

Hafiz and His Ghazal

Khwaja Shams-ad-Din Muḥammad Ḥafeẓ-e Shirazi who is known by his pen name Hafiz (Hafez), meaning a person who knows the Muslims’ holy book Quran by heart, lived in Shiraz in the 14th century. Hafez wrote mainly in lyric poetry or ghazals.

Ghazal is a form of poetry that deals with expressing the pain of love and loss, separation from the beloved and the beauty of love despite the pain and miseries one has to endure. Faith and hypocrisy are other themes found in ghazals, subjects that Hafiz has also cited quite a lot in his poems. Describing the freedom wine gives one’s soul and the beauty of the beloved’s black hair and eyes and her long eyelashes are similarly common in many of Hafiz’s poems.

A great many poems of Hafez have been picked and sung by singers who are a fan of the classical Persian style of singing.

The Night of Yalda (Shab-e Yalda) is one of the traditional occasions that Hafiz’s book of poetry has been almost an integral part since years ago.

Yalda, also called Shab-e Chelleh is celebrated on the longest night of the year and happens on the winter soloistic of the northern hemisphere. In fact, it is celebrated on December 21, a few days before Christmas.

Ferdowsi’s Shahnameh ‘Book of Kings’ and Sa’adi’s Golestan are the two other poetry books which Iranian would love to recite on this night.

The current tomb of Hafez which is a pavilion-like structure was built in 1935 in northern Shiraz, Fars Province to honor the memory of the poet. The lovely tomb called Hafezie was designed by the French architect and archaeologist André Godard (1881-1965). However, in some other sources, the design has been attributed to the French archeologist and architect Maxime Siroux (1907–1975), who worked with Godard in Iran for many years. 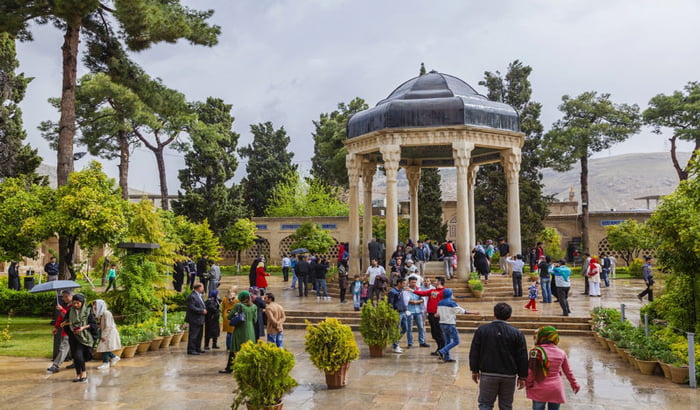 Tomb of Hafez was built in 1935 in northern Shiraz, Fars Province

Hafezie is a peaceful area with a spellbinding beauty where visitors can sit for hours, and if lucky, see people reciting the poet’s poems. For certain, a trip to Shiraz would be considered incomplete if this place is not included in the schedule.

The monument is situated on a circular platform with five stairs and its dome has been erected on eight white pillars. From the outside, the dome resembles a type of hat worn by Iranian Dervishes (Darwish); while the underside of the dome has borrowed more Persian architectural characteristics and enjoys a magnificent combination of colors like Persian blue, maroon red, dark brown, black as well as white.

If care for a visit to the tomb of Hafiz and other attractions of Shiraz click here.

However, the area where the poet rests has seen many changes through time. The first tomb for the poet was built 65 years after his death.  Mohammad Yaghmaie, minister of the ruling governor of the area honored the poet by ordering the construction of a shrine. They build a dome over the poet’s grave and made a pond close to it.

Yes this it wonderful