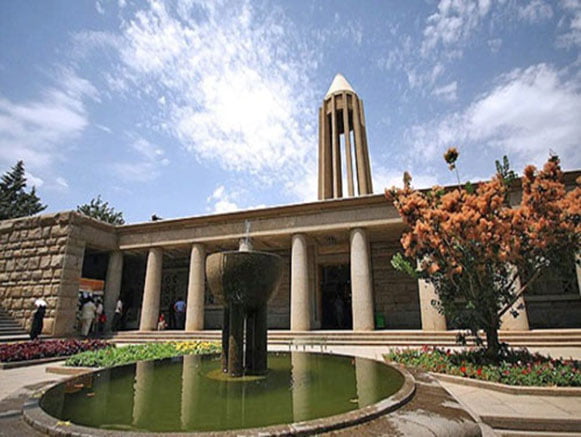 If you want to see the icon of Hamadan you must visit Avicenna’s Tomb. Avicenna is the well-known Iranian physician and philosopher who was born in Bokhara (present-day Uzbekistan), 11th century. He is universally famous for his knowledge of medicine and he has likely written the most famous book in the world of medicine, the Canon of Medicine, which was the principal book for the study of his major in the Islamic world and Europe for some centuries. Besides medicine, Avicenna’s contribution to philosophy has been significant. His other seminal book is Al-shafa which addresses logic, physics, mathematics, and metaphysics. During his life, Avicenna faced many hardships and he had no choice but to move from city to city. Finally, he died in Hamadan and buried there.

Avicenna’s Tomb is located in the middle of a square of the same name. an oval square with old plane trees, geometric garden, a well-fanned building and structure (the symbol of the square) that creates a nice promenade and it shines as a brilliant in the heart of the old city. All the world’s important cities got their reputation from a memorial building and the symbol of Hamadan is Avicenna’s beautiful Tomb for over 50 years.

The building has been renovated three times. Its first building was built in Ghajar period, but it was not suitable, therefore, the National Iranian Association decided to rebuild it on the millennium of his birth date. His current tomb which was built in 1954 includes both Pre-Islamic and Islamic designs and styles. This domed structure has stood upon 12 pillars each of which representing one of the scientific disciplines with which Avicenna was familiar. The present building design and plan has been adapted from the oldest Islamic monument; Qabus Ibn-e Voshmgir Tower in Gonbad Kavoos and in style of his time architecture with the use of modern techniques. A tower can be seen which inspired by Gonbad-e Kavoos Tower, also several gardens like Persian gardens, a waterfront that is an inspiration of cellar pools of the old houses and a façade of big granite rocks of Mount Alvand which is a symbol of old Persian imperial palaces. Instead of the house of Abu Saeed Dakhook, Avicenna’s best friend was buried beside Avicenna.

Now the southern hall is used as a museum for coins, crackers, bronzes and other excavated monuments belonging to some centuries before Christ and Islamic period. Also, there is a library with more than 8000 volumes of manuscripts and valuable Persian and foreign books in addition to Avicenna’s works and other authors and writers of Hamadan, in the northern hall. In the Avicenna’s pavilion, there is a picture of his skull that probably was drawn during the older building destruction.

In the east of the square, there is a complimentary semi-circle garden with a nice green view in which Avicenna’s statue has been erected with a book in its hand gazing the far horizons, probably humming this poem:

“In the vast desert of life, my mind sought so much

slitting the hair and not finding a thread. In my mind rose thousands of suns

and could not solve the mystery of an atom.” 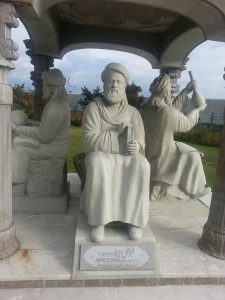 In modern Iran, he is considered a national icon and is often regarded as one of the greatest Persians to have ever lived. A monument was erected outside the Bukhara Museum. In Hamadan, the Ibn Sina Tajik State University in Dushanbe, Ibn Sina Academy of Medieval Medicine and Science at Aligarh, India, Avicenna School in Karachi and Avicenna Medical College in Lahore, Pakistan. Ibn-e Sina Balkh Medical School in his native province of Balkh in Afghanistan, Ibn-e Sina Faculty of Medicine of Ankara University Ankara, Turkey and Ibn-e Sina Integrated School in Marawi City (Philippines) are all named in his honor.

In June 2009 Iran donated a “Persian Scholars Pavilion” to United Nations Office in Vienna which is placed in the central Memorial Plaza of the Vienna International Center. The “Persian Scholars Pavilion” at United Nations in Vienna, Austria is featuring the statues of four prominent Iranian figures. Highlighting the Iranian Architectural features, the pavilion is adorned with Persian art forms and includes the statues of renowned Iranian scientists Avicenna, Al-Biruni, Zakariya Razi and Omar Khayyam.