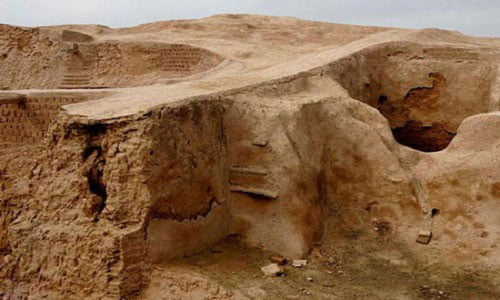 Haft Tepe is an archaeological site situated about 15 km to the southeast of Susa in the province of Khuzestan, in south-western Iran. The site is formed from small mounds. Therefore, it is named the Persian Language Haft Tappeh which means seven mounds. The first excavation at Haft Tappeh was carried out by E. Negahban from 1965 to 1978, in which a tomb building and remains of two terrace complexes were discovered. Several tablets and stones inscription were founded that gave important information on this antique city. One of these tablets the seal of Athibu, Governor of Haft Tappeh was found. Due to this discovery, the scientists supposed that today’s Haft Tappeh is identical with the antique Kabanak. The inscriptions indicate that large monuments stem from the middle Elamite period (15th – 14th century B.C)

The city of Kabnak is mentioned as an important political center during the reign of the Elamite king Tepti-Ahar, the last king of the Kidinuid dynasty ruling in the 15th century BC. He may also have been buried in the city. After his death, the center of power returned to the old capital Susa, although there is no clear evidence that Kabnak ever held real power at all. Due to the turmoil of this era, it is possible the construction of Kabnak was necessary after Tepti-Ahar lost control over Susa, however, this theory has not been completely confirmed by solid proof. Some centuries later another city was built at the nearby site of Choqa Zanbil.

In winter 2004, new excavations were started under the leadership of B. Mofidi-Nasrabadi from the University of Mainz (Germany). In order to get a more detailed overview of the total structure of the city and its extension, he carried out geophysical prospection. Several monumental complexes with extremely wide walls were determined.

Recent excavation resulted in the finding of the large part of an administration building of the 14th century B.C. Furthermore, it was possible to determine the eldest building level at Haft Tappeh, which belongs to the beginning of the second millennium B.C. An interesting discovery appeared in 2012 behind the wall of a large complex, there were amassed several hundred skeletons over each other in the street. Some of the skulls and bones seem to belong to children. A large number of deceased led to the assumption that there took place a massacre. Therefore, it seems likely that Haft Tappeh was destroyed in the 14th century B.C and has then lost any influence in this area. Much later in the Parthian period traces of settlement can be found again.