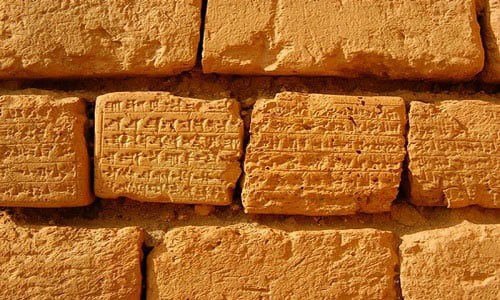 Ziggurat: I “Untash Napirisha” with golden colored bricks, silvered colored with brick the color of green and black have built this temple and have gifted it to “Napirisha” and “Inshushinak” the Gods of this sacred place. The person who ravages it, the person destroys it its bricks may the fear and dread of “Napirisha Inshushinak” and “Kiririsha”, Gods of this sacred place fall on his head and may his race be removed from.

A temple tower of Ziggurat is a characteristic religious building in Mesopotamia and Elam. It consists of several floors, on the top of which a high temple was built for one of the main gods. In Chogha Zanbil the ziggurat was consecrated to deities Inshushinak and GAL. Inshushinak was from an earlier period on an important god in kingdom Elam and its capital Susa. GAL is a borrowed ideogram from Sumerian writing, which means great. The scientists have still not found reading in Elamite language. It is, however, safe to assume that GAL was one of the most important Elamite deities. Besides the high temple, a temple consecrated to Inshushinak eas situated on the first floor of Ziggurat. Temple of other deities was found around the ziggurat. A series of temples, including the temple of Pininkir, IM and Shala, Shimut and Nin-Ali, Naprateps was built at the east corner of Temonos within the inner wall.

Outline of the history of Ziggurat (Chogha Zanbil) 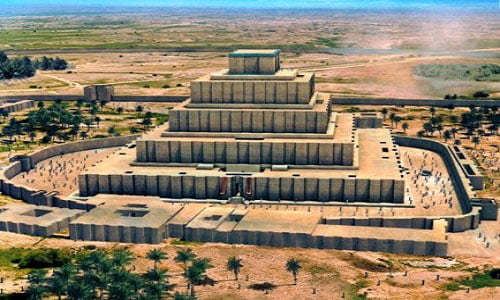 Chogha Zanbil is situated in southwest Iran about forty Kilometers southeast of the ancient city of Susa. It was built on a plateau above the banks of the river DEZ. Its antique name is DUR UNATASH, which means the castle or the city of Untash. In the 13th century B.C king Untash Napirisha founded a completely new city. Its size and splendor were intended to honor the gods and to manifest the power of king Untash Napirisha. At the center of the city Ziggurat (temple tower) was built of which two floors still exist. It was surrounded by a wall, which is the inner wall of three concentric walls in DUR Untash.

Between the inner wall and the outer wall, several temples of different Elamite divinities were built. The outer city wall was about 4 KM long and encloses an area of approximately 100ha. The royal quarter was situated adjacent to major city gate some 300 m east of the ziggurat. In this area, a group of three major building with large courts surrounded by long halls and rooms was excavated. Beneath one of these building, five ground tombs were found similar in size to those but different in construction of “Hafttappeh”. The tomb in Chogha Zanbil, however, were of a much more monumental dimension. The building materials in Chogha Zanbil are mainly Mud-brick and occasionally baked bricks. The monument was well built and beautifully decorated with glazed baked bricks, gypsum, ornaments of faience and glass. Thousands of baked bricks bearing inscriptions with cuneiform characters in Elamite language were all written by hand, which ornamented the most important building. Glazed terracotta statues like balls and winged griffins guarded the entrance to Ziggurat. Near the temple of Kiririsha and Hishmitik-Ruhurair kilns were found that probably were used for the production of pottery and decoration materials. 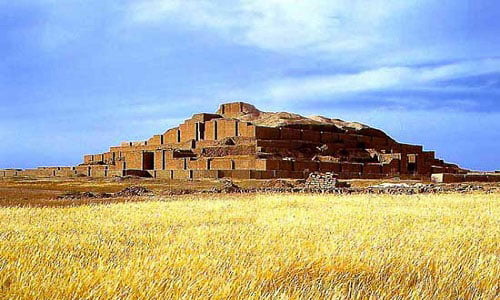 The ziggurat was built in two stages. In the second phase of construction, it took its multi-layered form. Beyond Babylonia and Assyria, this is the only ziggurat that has been preserved. It was obviously constructed according to models of Mesopotamian cultures. There is only scarce information about the actions during the divine service. However, it is known that the Elamites were religious and held regular divine services. Some reliefs and plastic art give us a glimpse about how these might have been carried out.

Roman Ghishman excavated most of the ziggurat and vast surrounding area from 1951-1962. He excavated walls of the site with gates. After his excavations, most of the monuments are exposed to erosion. Due to rainfalls, water gets into the structure of the building, accelerating the process of deterioration. During the 98-99 the monuments were not only uncovered but also measures have been taken by the cultural heritage organization to protect the ziggurat from further erosion. 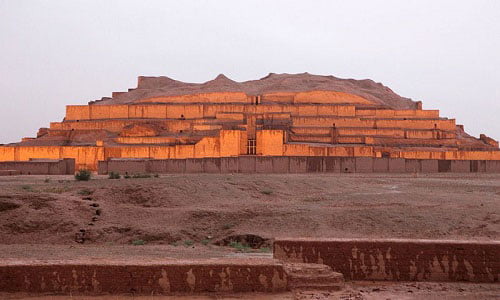