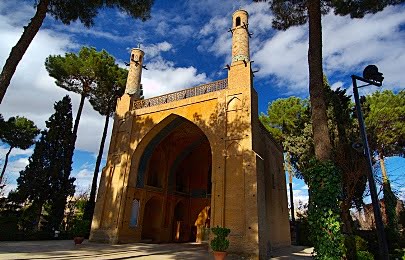 The Menar-Jonban (shaking tower) is one of the well-known historical monuments (tomb) located in the famous city of Isfahan. This beautiful historical city was the capital city of Iran for a very long time and contains several attractive monuments. Each of these monuments (mosques, tombs, bridges, palaces, etc.) has special characteristics from the structural and architectural viewpoints. Menar Jonban (Menar in Persian means tower and Jonban means shaking) was constructed 700 years ago using masonry materials and then completed by the famous Iranian architect and constructor named Sheikh Bahaie. The Menar Jonban (Shaking Minarets) is a mosque in Isfahan in Iran.  It was built in the 14th century to cover the grave of Amu-Abdullah Soqla. Its special features are that if either of Minarets is shaken, the other minaret will vibrate as well. The Ivan and the porch were probably erected shortly after 1316 to cover the grave of Amu-Abdullah Soqla, a hermit, who was buried here. There are also pieces of marble stone on the grave that the Holy Quran “Yassin” was written on that and makes it more beautiful. There are other inscriptions in the tomb, including inscriptions on the marble top of the original stone Anobanini, the righteous and pious uncle as a man named Abdullah. The mausoleum was built while the minarets were added later by architect Sheikh Bahai. The architectural style of the monument is that of the Mongol period and completed with dark blue tiles in the form of stars decorating two arches and the sides of the portico. The minarets are of later, probably Safavid origin and are largely responsible for the fame of the otherwise unremarkable shrine. Because of the ratio between the height and width of the minarets and the width of Ivan, if you climb into one minaret and shake it, the other will shake in unison. The wooden beams on the upper part of the minarets have been placed there to facilitate the shaking of the minarets, but the presence of wood in the brickwork causes other complication. Shaking is in theory restricted to once every twenty minutes, however, particularly during holidays, there is a constant stream of visitors who experiment with phenomena and visitors will have ample chance to observe it from ground level without running the risk of being blamed for any further dereliction. In the past time, they didn’t shake the Minarets and people just went up the stairs and felt no shaking but now a day, within a specific time, it’s been nearly about two years they are shaking (the minarets) and it’s a special feature in this building and you can go up the stairs and enjoy your time. The porch is 10 meters high and 10 meters in width the minarets are 7 meters taller and are 4 meters in circumference. There are two rooms in this building that is known as Chele Khune.

The architecture of Menar Jonban 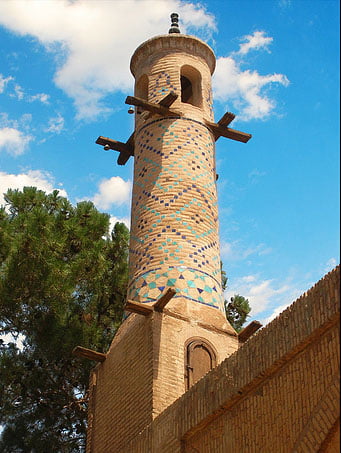 From the structural point of view, Menar-Jonban has three special and unique characteristics that have attracted the attention of scientists and engineers for many years:

Each minaret is 7.5 meters high and they are linked to the roof by a spiral staircase. The building is built in Mongolian style and only has one Iwan (a rectangular hall or space, usually vaulted, walled on three sides, with one end entirely open). The two minarets have not been added to the building until the end of the Safavid era. The most interesting fact about these minarets is not their simultaneously shake, but the mystery behind these shakes. So far, no one exactly has exactly known why these minarets shake in the way they do, but the closest guess is that these movements are due to the Doppler Effect. Since the minarets are identical in every way, the movement of one will cause the same effect on the other. Also, in terms of decorations, Menar Jonban has beautiful blue and turquoise tiles with four-star and multilateral shapes. Such dynamic behavior has become a puzzle to architects and structural engineers for many years as there is no crack running on it due to centuries of shaking. Some believe that its considerable flexibility comes from a special type of mortar which has been utilized in its masonry. It consists of an indoor hall with the dimensions 10mx13m in plane and 10m in height with the arch roof, and two shaking towers located at the roof-top of the entrance hall on both sides. The monument was constructed by brick masonry units. Masonry walls around the hall are the resisting system for vertical dead loads and lateral seismic forces. Peripheral walls with the thickness of 0.8m are strengthened by using brick piers with 1.8×1.8m in cross section. One of the design characteristics of the walls is the compatibility with architectural views in the monument. The designer of the monument has used brick piers to increase load resisting and lateral rigidity of walls; and also, created a good architectural environment inside the monument. It should be mentioned that this compatibility between architectural and structural design exists in many Iranian historical monuments. From both architectural and structural point of view, the most important characteristic of the historical monument of Menar-Jonban is a complete symmetry about Y-axis. Construction of two similar cylindrical brick towers on top of the roof is an interesting part of this monument. The outside diameter of these towers is 1.4m at the bottom and 0.9m at the top and the brick wall thickness is 0.2m. There is a helical staircase inside of each tower for access to the top of them. A person can pass through this staircase and vibrate the tower at the top simply by shaking it. Two horizontal wooden belts located at the top and bottom levels of towers. It seems that a wooden frame used in the design of the towers to provide more flexibility. A considerable point in designing the towers is two joints or spaces with about 5cm in width located at the top level of the roof between each tower and the connected roof. There is a strong belief that these joints have an essential role in the vibration mechanism of the towers. It seems that the designer considered these joints to prevent local damages in the connection regions during vibration of the towers or the whole structure.

The vibration mechanism of two similar towers can be simply simulated via two similar pendulums having low damping and their resonance phenomenon. Assume that two similar pendulums (with equal mass and length) are tied together by a horizontal wire symmetrically. In this condition, by shaking one of them, the second one will start to vibrate automatically. The amplitude of the vibration and phase angle of the two pendulums will be similar after some oscillations. Such a phenomenon will not occur in the case of different pendulums for example with different lengths or masses.

Here are some useful questions that can help you

1) In which era Menar Jonban has been made and how old is it?

It goes back to the Safavid Dynasty. Isfahan, central Iran, is a top tourist destination for good reasons, it was used to be a capital of the mighty Safavid Empire and it dated back to 700 years ago.

2) Where is located Menar Jonban?

Menar Jonban is located on the west side of Isfahan, almost on the edge of the city, in Atashgah Boulevard. The closest tourist attractions to this place would be Nazhvan Forest Park, Birds Garden, Fire Temple, Isfahan Aquarium, and Vank Cathedral.

3) Does it really shake?

You have not probably any structure like this before. Menar Jonban or shaking Minarets have two pillar shape parts and if you shake one Minaret, the other one shakes as well.

It completed by the famous Iranian architect and constructor named Sheikh Bahaie.