When you are traveling in Iran and visit Shiraz, Vakil Mosque is a must-see for both Iranians and non-Iranians visitors. Karim Khan, the founder of Zand dynasty in the 18th century, built it as part of his grand development project in the heart of his capital city.

It was restored in the 19th century during the Qajar period. Vakil means regent, which was the title used by Karim Khan, the founder of the Zand Dynasty. Shiraz was the seat of Karim Khan’s government and he endowed many buildings, including this mosque.

The mosque is connected to Vakil Bazaar and almost attached to Vakil Bathhouse with a lane in between. Before you enter the mosque, you can see one of the corridors getting you to the middle of the main passageway of Vakil Bazaar on the left-hand side. Therefore, there has been easy access from different directions for everyone to find their ways to the mosque. 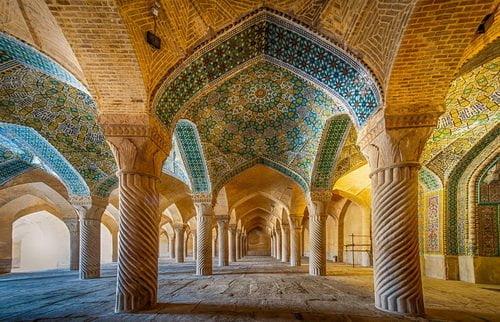 Karim Khan Zand is more or less known to everybody, especially those who are interested in the history of Iran. Yes, he is the king who established many priceless and glorious buildings and left them all as a reminiscence for the next generations. He selected Shiraz as the capital city and since then it had always been in the center of his attention. So, it brought a splendid era to Shiraz. Vakil Complex is one of those many contributions he made to Shiraz. Vakil Mosque is one of the buildings in this complex. According to authentic documents, Vakil Mosque was built in 1773. It was simultaneously under construction together with Vakil Bazaar and the square. There are also some narratives signifying that Vakil Mosque was renovated by Hossein Ali Mirza Farmanfarma, the son of Fath Ali Shah Qajar.

The entire structure is extravagantly built with spacious sections in mind. There’s a vast courtyard with a relatively long pool in the middle of it. Around the courtyard, there are two Evans (iwans) at the Northern and Southern sides in a symmetric way. On Eastern and Western sides, there are not any Evans hence finalizing the structure as a Twi-Evan courtyard plan.

The vast courtyard is covered by stone slabs, which has recently undergone some reconstruction and new slabs have been installed. Such flooring is extended from all corners to the central pool and vice versa. As there’s no garden in the courtyard, this flat space has added to the greatness of the courtyard and allows the beauty of the tiled façade of all sides shine and project their livelihood.

The decoration on the Shirazi “haft rangi” (seven-color) tiles of the entrance portal and these two Evans are eye-catching and similar. Tree-of-life patterns are clearly occupying major parts of these sections giving a peaceful wave to the square feel of the façade tiles.

At the Southern Evan, there’s an entrance leading to a roofed columned hall (shabestan) with 48 monolithic pillars joining one another on top through vaulted brickworks. The pillar shafts are carved in a spiral way and decorated in the form of acanthus leaves at their capitals. Color of the stone pillars and those of brick-formed ceiling match.

All ceiling decoration has been made by plain bricks except the one line coming from the southern Evan directly toward the midrib of the mosque. This part is an amazingly splendid corridor-like pathway set by its ceiling tile decoration embellished by Shirazi “haft rangi” (seven-color) tiles.

The builders of the mosque have made a minibar (preacher’s seat) out of a piece of green marble with a flight of 14 steps leading to the seat on top. This minibar is an exemplary work at Zand-period mosques.

The architecture of Vakil Mosque

Vakil Mosque is an 8660 square meter premium built on an 11000 square meter space. The architect of the mosque is unfortunately not known yet. The pattern of this mosque is designed to include two verandas and two southern and eastern seraglios. Generally speaking, different parts of this mosque are the entrance, corridor, yard, large seraglio, winter seraglio, altar, Islamic marble pulpit, two verandas, and pearl arch. The architectural detail of Vakil Mosque is admirable but the most amazing parts are its three arches that are unrivaled in Shiraz at least: the arch above the entrance, the pearl arch, and the large seraglio arch. The carvings on these arches are too fabulous to be ignored. The simplicity of the Iranian art and Persian paintings and writings on the walls, eye-catching tiling, and the delicate use of colors are all the beautiful details that immediately attract any visitors.

Visit Zand Dynasty Monuments during your stay in Iran

It won’t easily happen to see several Zand Dynasty monuments when you are traveling in Iran unless you visit Shiraz and pay a visit to such sights. Therefore, I cannot recommend enough spending some quality time in these buildings and quench your thirst for the taste of Zand architects and their masterpieces. Also, Shirazi artists have their own lively touch no matter which period they have been living in. That’s why I think you won’t regret spending more time in this beautiful city.