There are many options for sightseeing and creating different moments on Lotfali Khan Zand Shiraz Street, and Qavam House is one of them, a garden where you can stroll through the centuries and enjoy its breathtaking atmosphere. This garden, reminiscent of the Qajar era, is known among the general public as the Qavam Garden and is also known as the Narenjestan Qavam by its name. Qavam Garden is located in an area that is the eastern endpoint of the old part of the city. In Narenjestan Qavam, there is the footprint of the seven Iranian arts that can be seen, plaster, traditional painting, mirrors, brickwork, carving, engraving, and inlay have become more and more beautifully displayed.

Who was the family of Qavam?

Qavam was a powerful and influential family of the Qajar dynasty who ruled the Persian Gulf and surrounding areas for several centuries. The family was descendants of Haj Ibrahim Khan, the Sheriff of Shiraz, who lived in the “high Kafet” neighborhood of Shiraz. 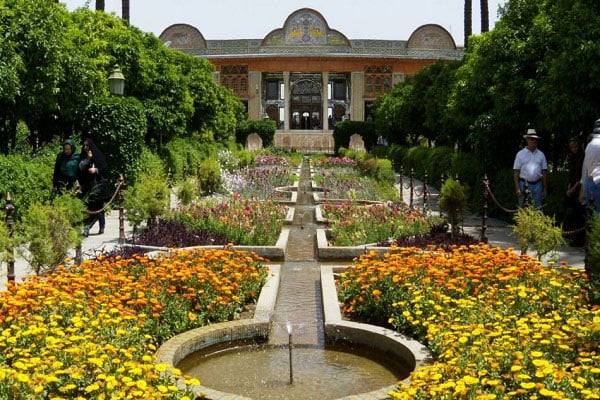 According to historical documents, during the reign of Zandiyah, Haj Ibrahim Khan, the sheriff of Ettadat al-Dawlah Shirazi, betrayed the elders of Shiraz at that time, by Lotfali Khan Zand. This made Agha Mohammad Khan Qajar simply dominate the south of Iran and expand his sphere of influence and monarchy by overthrowing the living government. In return for this valuable service, Agha Mohammad Khan handed over the Shiraz government to the sheriff, who also settled his relatives in different provinces of Fars and held a position in government for each. He was also in the office of Fath-Ali Shah until, after some time, the people around the king gave him a coup and made him skeptical of Haj Ibrahim Khan. Fath Ali Shah ordered the assassination of Haji Ibrahim Khan, the sheriff and all his family, under the influence of those around him. The sheriff had a son, Ali Akbar, who was not killed because of tuberculosis, and he later miraculously recovered.

On Fath Ali Shah’s trip to Shiraz, Ali Akbar visits him and is reminded of the overthrow of the living government and the slaughter of his family. Somewhat regretted by his actions, the Shah nicknamed him Qavam al-Molk and thus he became the governor of Shiraz under the full name of “Ali Akbar Khan Qavam-ol-Molk I”.

In those days, the Narenjestan building consisted of about 940 square meters consisting of two parts, the north and the south, and an area of 3500 meters. About 2560 meters of landscaping was done for this garden. In the Qajar period, the Garden of Qavam and its mansion were called “exterior”, doing business and holding ceremonies and celebrations and resting and welcoming guests.  The house of Zint al-Molk, located today in the west of the complex, was also the residence of the Qavam family and was therefore called “Androni”. There was an alley between the exterior and the interior, and these two spaces were connected through an underground tunnel. The features of this set were the outer and inner axes perpendicular to each other. Zintul Molk’s house became famous because of Ms. Zintul Molk’s residence. What we know as the Narenjestan of Qavam was actually the outside of Qavam’s house, which ran from the basement to the interior of Qavam, which was used by guests for chores, office work, and reception. Qavam Garden was later renowned for its abundance of orange trees in it and became one of the most beautiful and valuable works of the Qajar period. 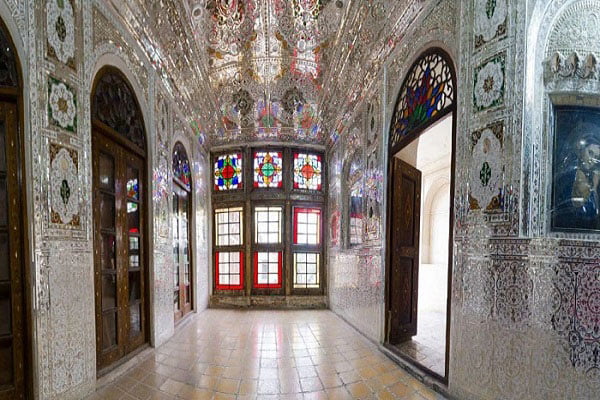 The style of the garden is similar to the Qajar period, but the original building design is an adaptation of Zandiyeh architecture. The creators have used the symmetry principle in the design of the Orangery Garden; you will notice with some care that the porch or hall of the Garden Mirror is in the middle and the rooms are harmoniously shaped to its right and left. The complex initially included the palace, the garden, the bathroom, the chainsaw, the stables, and the schoolhouse, but the chainsaw and stables were destroyed during historical events and the passage of time, and the rest of the artifacts can be seen in the garden today.

The main entrance to the garden is a door that opens to the south and is made of teak wood and adorned with beautiful inlay. This will lead you into a vestibule that is an enclosed space with an alley and courtyard and can be seen in many Iranian buildings. The roof of this vestibule has stunning brick and tile and plaster masonry, and space is connected to the garden by two corridors. The front porch is adorned with eye-catching brickwork, and on the front door, there is a red marble inscription on which verses from the Holy Quran are engraved. Upon arrival, the traditional and decorative shop attracts visitors and passes by a beautiful and symmetrical area of orange and palm trees. Crossing the courtyard, the main building and its spectacular porch fit into our frame of view, with several stairs to the porch on either side of the porch. 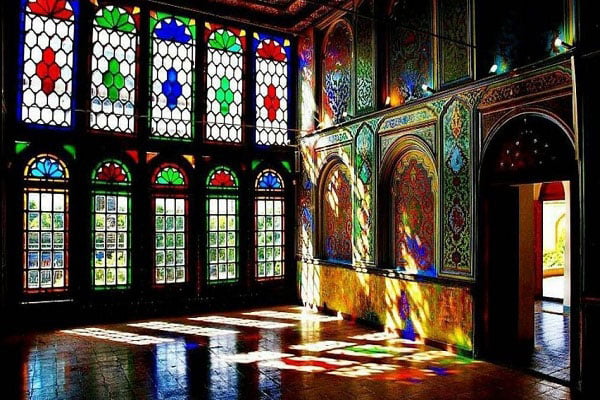 The main building of the garden is a north building with two floors and a basement. The mansion has twenty rooms on two floors, all of them except the eastern one, eventually leading to the last western room. The entire basement has begun from the south and extends to the north. The southern part of the basement was the gunpoint because the residents of the mansion were governors of the city and had a number of soldiers. The master plan and two-column porch of the mansion show the style of Zandieh’s common architecture, and sculpture, painting, plastering, and mirroring are the finest examples of Qajar art in all of the gardens. The most magnificent part of the main building is a large veranda measuring 9 meters long, 5.10 meters wide and 6 meters high with two monolithic stone pillars and a flat roof overlooking the pond in the middle of the garden. On either side of the large porch, there are two stairways to the entrance and access to the other portions, reaching a height of two meters from the floor of the courtyard. These stairs lead to two sleeping springs that are upstairs, exterior, flat and open and have an arboretum. On each side is a large hall and a large room covered with white and blue tiles. At the bottom, there are stairs that are created to go upstairs. As you enter the main room adjacent to the porch, you will see a mirrored ceiling that will make you fade away. All over the room or the main hall and porch are covered with mirrors and look very eye-catching. The main hall is known as the Mirror Hall or King’s Hall and accesses the central porch through a crescent wooden window with sash windows.

Opposite the king’s porch are the rooms that were the residence of the time and the relatives and guests nearby. Upstairs there are four rooms, two of which are on the back, with windows and porches overlooking the porch. In the past, these rooms were also used for guest accommodation. Generally, the suite has two units consisting of five rooms, four units with two to three rooms and two units each with two rooms and six solitary rooms. The rooms are divided in such a way that different groups of guests can be accommodated individually.

The grand porch of the mansion is one of the most beautiful two-pillar porches of the Qajar period in Shiraz because of its arts and decorations. The two columns of the porch have a cylindrical body with integrated marble and columns adorned with exquisite work. In the middle of the porch roof, there is a large medal, with six oval views drawn around it. Oil paintings on the ceilings are similar to those of the Zend-era paintings; they are painted on ceiling sticks, read in the native Marjouk language, and are specific to Shiraz artists. This type of painting can be seen in most of the buildings of the Zandiyeh and Qajar period of Shiraz and is one of their indivisible decorations. On the fringes of the ceilings, some wallpaper and colored paper photos were also brought to Europe from Iran at that time. On both sides of the roof of the upper porch are painted wooden beams. Most of the large porch ceiling paintings and rooms are works of the famous painter and miniature artist of the time, Lotfali Khan Asghar.

In front of the main building are sash doors with colored glass. Above the main building, following the style of construction of that era, there are crescents that number three. The pictures and the beautiful designs on these crescents are tiled and the crescent between the two-columned porch and the king is also adorned with colored glass that arrived in Europe from the Qajar period. The middle crescent features a double lion bearing a stamped plate, “Nasr al-Allah and the imminent conquest,” and two angels take it from above. The tiled crescent features a leopard-like deer hunting on both sides, with slim lines in the background. All the doors of the mansion are made of walnut; they are either inlaid or inlaid in Indian style and have used clams from the Persian Gulf.