In cartoons, mirages are usually portrayed as lush green oases surrounded by swaying trees; way different from the real-world mirages that people might happen to see. An image that mesmerize the eyes of a desperate passenger stranded in the middle of a desert. Shazdeh Garden in Kerman Porovince is a mirage that has come to reality with the magical wand of Persian garden designing. 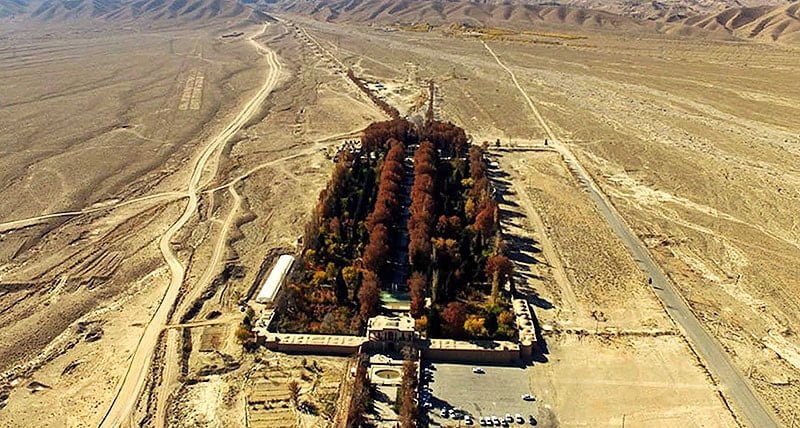 Shazdeh Garden is located in the middle of a desert in the city of Mahan in Kerman Province.

Shazdeh Garden, meaning Prince’s Garden in Farsi, is located in the middle of a desert in the city of Mahan in Kerman Province. To get to the garden, one would have to drive about 25 kilometers on the road connecting the city of Kerman to Bam.

Surrounded by nothing but desert from all directions, the garden is one of the finest examples of Persian gardens.

Persian Gardens have three important characteristics: one is that they are all established along a river or are in the vicinity of a qanat. (Qanats are underground watercourses tunneled in areas with low amount of rainfall.)

The second characteristic would be that the whole garden is enclosed with brick walls, which besides bringing the garden the privacy that is of great value in Iranian culture, they protect the trees and flowers against the scorching arrays of the sun.

Additionally, these gardens include a pavilion (called Kushk in Farsi Language).

In the past, Iranian gardens almost always were constructed in a rectangular shape and were divided symmetrically by water courses and line of trees.

Shazdeh Garden is established in a land stretched as far as 5.5 hectares, and like many other Persian gardens it has a rectangular shape. It also owns an impressive entrance built at the lower end while its pavilion, built in two floors, is located at the upper end. The distance between the gate and the pavilion is adorned with a number of water fountains, flowers and tall trees.  Pines, cypress, elm trees, ashes, and poplars are some of the trees grown in the garden.

For the land having a steep slope, standing at the entrance, one can have a picturesque view of the stair-stepped garden. 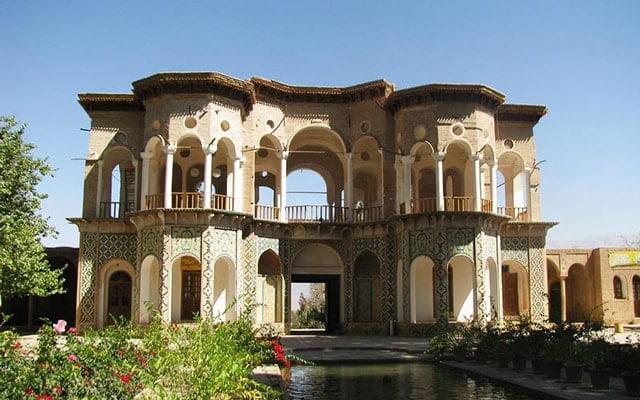 The water flowing in Shazdeh Garden originates from Tigaran Qanat and River which both are filled by the melting snows of Jupar Mountain. Moreover, the steep slope of the area where the garden is located helps the water flow effortlessly.

Having quenched the thirsts of the many trees of the garden, the water flows out of the garden and heads toward the village of Moqsam in Bandar Abbas County, Hormozgan Province.

If interested in visiting Shazdeh Garden of Kerman touch here.

Shazdeh Garden became the inspiration for one of the most beautiful works of the distinguished Iranian artist Monir Shahroudy Frmanfarmaian.

Monir created this artwork in 2009-2010 and named it after the garden. Monir’s Shazdeh Garden resembles an opened double-casement window that has been opened towards a garden with shining trees.

In an early interview with Stephanie Bailey Monir had said that since the garden had belonged to his husband’s cousin who both were princess of Qajar dynasty (1796-1925), she had had the opportunity to visit the garden several times.

Farmanfarmaian, who passed away in April 2019 at the age of 97, was a sketch artist, illustrator, and art collector. However, she is mostly known and remembered for her astonishing geometric mosaic works made of mirrors.

Monir’s mirror works are in fact abstract geometric works that are the result of combining traditional Iranian Ayeneh-Kari and modern arts. Ayeneh-Kari is a traditional indoor design in which small pieces of mirrors are implanted in plaster. 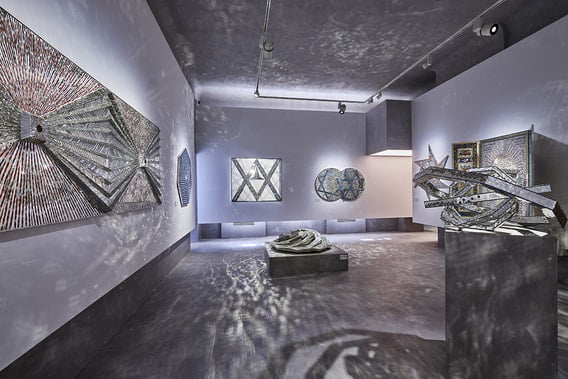 The idea of her signature works crossed her mind when she visited Shah Cheragh Mosque in Shiraz, capital of Fars Province in 1966. Like many other mosques in Iran, Shah Cheragh is decked with tiny pieces of mirrors.

Monir Farmanfarmaian Hall dedicated to a number of the artist’s mirror works and paintings is now home to the shining Shazdeh Garden.

Negarestan Garden is located at Baharestan Square on Shariatmadari Street and is easily accessible by bus and subway. To get to the Garden one would have to take a 5-minute walk from Baharestan subway station.