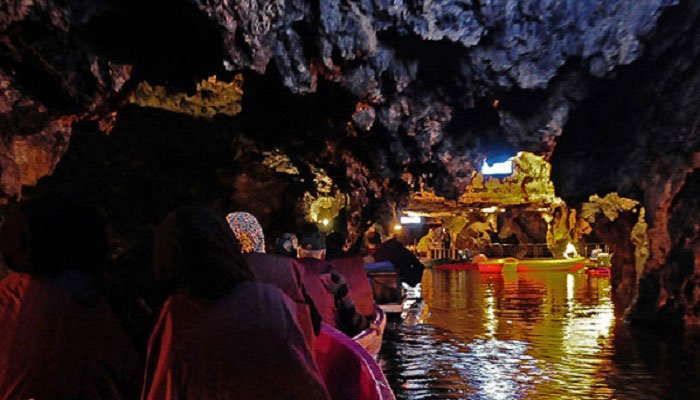 Alisadr Cave is one of the rare samples of boatable water caves and the most wonderful phenomenon in the world. In the distance of 75 kilometers northwest of Hamedan. It is located in Alisadr village, one of the districts of Kabudarahang Township. This cave lies on the 48o 18’ parallel of longitude and on the 35o and 18’ parallel of latitude with an approximate altitude of 1900 meters above the sea level.

Alisadr Cave was formed in Sarighiyeh lights (Yellow Rock). There is two other cave in these heights: Subashi and Sarab, their distance to Alisadr Cave are 11 and 7 kilometers. These caves probably connected to Alisadr Cave, Because of the high extension of the crystallized calcareous layer in the region. 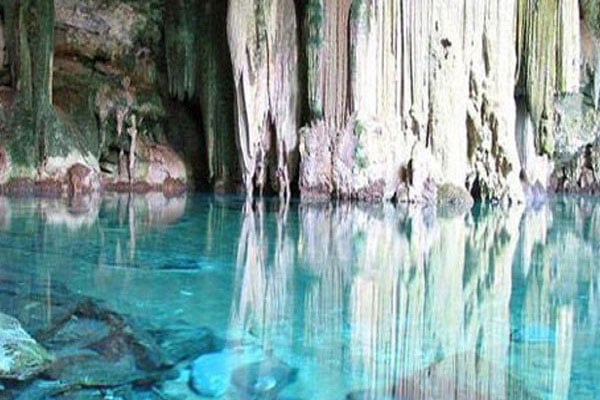 After millions of years, they extended and gradually connected to each Molis Cave in France, Bookan, and Shovaliyeh caves in Australia. Its colorless water has no smell. In addition, it has a normal taste. There exists no living creature in the cave’s water and its temperature is 12o centigrade. The water is so limpid that one can see the depth of 10 meters with naked eyes and ordinary light. The results of physical-chemical experiments show that the chemical composition of water is approximately the same in different parts of the cave and is considered as light calcic bicarbonate with the nearly neutral pH (acidity). The water is not drinkable because it contains different calcareous salts.
Since the surplus water of the cave flows out of the cave in the form of fountains (like Cheshmehshoor), the amount of water flowing in the cave is stable, but when there is a shortage of water supply, it has some fluctuations that its effects can be seen on the cave walls.
Depth of water changes from zero to 14 meters in different parts. The amount of water flowing in the cave is supplied by rainfalls, underground springs continue flowing of water from the walls and cave ceiling, all of them are provided by raining and snowing. The height of the ceiling in some parts is about 10 meters; it is covered by pure carbonate calcium and some combinations of it in other parts. They were formed on the way of the following of the water from outside the cave. These sediments made different forms of stalactites on the floor and waterless areas. There are also various attractive stalagmites 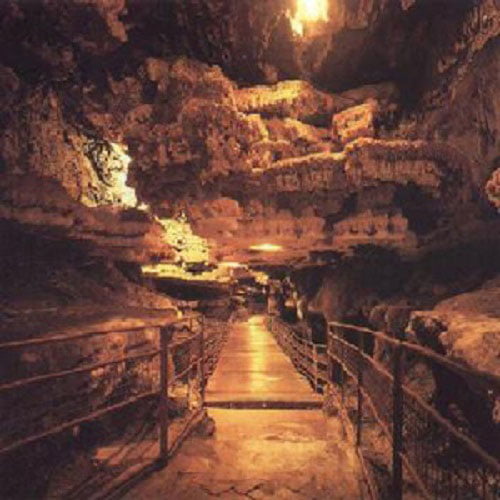 Inside the cave, one can see a nice view and inhale fresh air without dust and microbial impurity. It is cold in summers and warm in winters. It has a light motionless whether in such a manner that if one light on the candle, no move is seen in its flame.
Although all of the cave chambers have not been explored, climbers advanced about 10-11 km along with them. At the present time, after boating one can walk along the cave and continue his way by boat. So far, 14 kilometers of the cave canals have been explored, but only some 4 kilometers have been illuminated and all ready to use. After visiting the stalactites, the great stalactites, the third and fourth islands, boating, cave climbing, passing through water paths and crystalline ceiling chambers, one believes that this phenomenon is one of the masterpieces of universe creature’s which no one can describe and show all of its glory and beauty.