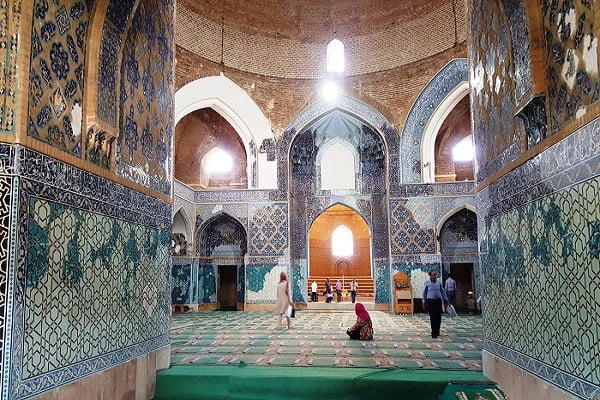 Blue Mosque, also known as Kabood or Goy mosque, is a famous heritage site in Tabriz, Iran. The mosque and some other public buildings were constructed upon the order of Jahan Shah, the ruler of Kara Koyunlu dynasty who chose Tabriz as the capital of his kingdom. There is a mausoleum in the southern section of the mosque where the builder, Jahan Shah, is buried. 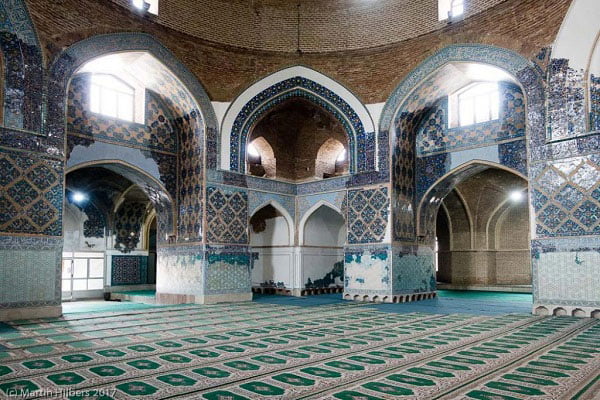 Originally built in 1465, the mosque was among the most glorious buildings of its era. Once built, artists took a further 25 years to cover every surface with dark and bright blue tiles and intricate calligraphy. This precious work of Islamic period is known as “the turquoise of Islam” since it was decorated in turquoise-colored tiles for which it is nicknamed. Decoratively, it can be compared with Timurid works in Herat, Samarqand, and Khorasan, and in terms of architecture, it is comparable with Ottoman buildings especially with great mosques of Orhan and Yeshil in Bursa. There are at least 3 “Blue Mosques” in the world: Tabriz, Istanbul, and Yerevan. There is another one in Afghanistan too, but it is not so famous. 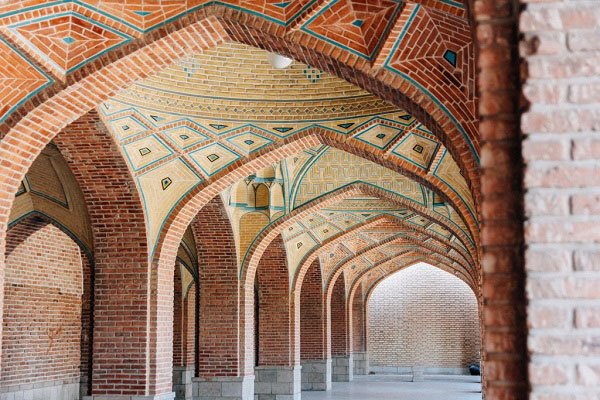 The most outstanding features of the Blue Mosque in Tabriz include its especial blue tiles in northern façade, its large dome that spans a large area of about 30 meters by 30 meters and its double-layered roof made of bricks and some special limestone. Geographically located in a cold climate, the mosque has no quadrangle. The diverse Kufic and Thulth scripts, the exquisite arabesque patterns, and the admirable chromatic of these facades, which are truly stupendous, were created by Nematollah-ebn-e Mohammad-ol-bavab, the famous calligrapher. The walls (inside and outside) had been covered with mosaic tiles. 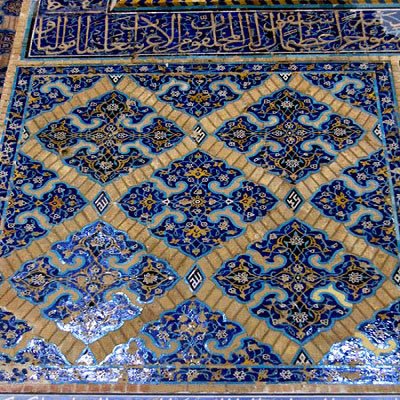 Blue Mosque, the only remnant of the glorious past in Tabriz, survived one of history’s worst-ever earthquakes in 1727, but collapsed in a later quake in 1779, leaving only the entrance Iwan. Back then, devastated Tabriz had more important things to do than mend the mosque, as a result, it lay as a pile of rubble till 1951 when reconstruction finally started. Some decades later restoring the building to its former glory was done by Reza Memaran Benam, under the supervision of Iranian Ministry of Culture.  Inside the mosque used to be tiled with superb blue ceramics many of which went missing during the quake and were simply replaced by painting instead of tiles. The brick superstructure is now complete, and the results are more than impressive. Some of the original tiles can be found around the entrance, where a hint of the original blue exterior is on display. However, the tiling is still incomplete. 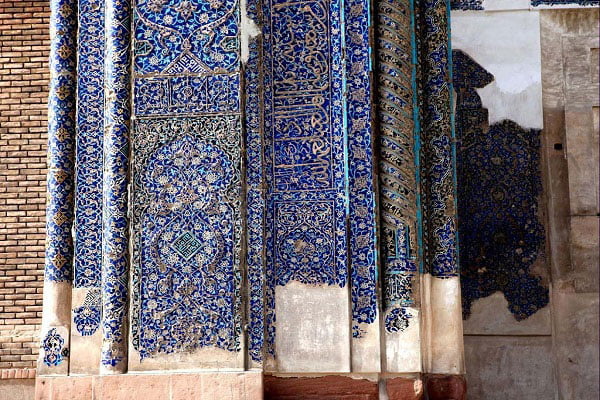 Entering the mosque from the northern entrance, one might need minutes to look at the scripts and tiles on the northern façade. Inside the mosque, the lighting formed up of the combined daylight beams coming through the well-located windows seems quite fascinating. The remainder consists of a tomb and a mosque with a double-layered dome. Date of construction and the name of its founder have been curved in the bas-relief of the main entrance.

There is a smaller chamber far from the entrance which used to serve as a private mosque for Kara Koyunlu Shahs. Steps lead down towards Jahan Shah’s tomb but there is no easy access to this part of the building. Jahan Shah was killed by Uzun Hassan (the ruler of Ak Koyunlu) and buried on the only part of the mosque that had survived the ruinous earthquake. The mausoleum was built in the southern section of the mosque and is entirely covered with hard marble slabs on which verses from Quran are engraved in Thulth scripts on a background of arabesque. The roof of the mausoleum and the main dome chamber of the mosque collapsed during an earthquake in 1779 A.D and was rebuilt in 1973.

This mosque is the forefather of any religious buildings in Iran and central Asia, even older than the mosques in Samarqand and Isfahan. The 15th century Blue Mosque in Tabriz was described by Lonely Planet as “among the most glorious buildings of its era.” While it has seen considerable earthquake damage, the blue tile-work in the entrance arch remains an indicator of what the original exterior must have looked like.

On the right side of the mosque, there is a beautiful small park called Khaqani park, honoring the 12th-century Azari-Persian poet Shirvani Khaqani who was born in Tabriz, with a large marble statue representing the poet which makes the park worth a visit.

Iron Age museum located in Imam street and next to the blue mosque is an archeological site including cemeteries and traces of Iron Age pottery. This museum is related to two and three Iron Periods, the end of the second millennium and early first millennium BC includes several skeletons, jewelry, adorned machinery, equipment…which were buried together beside these skeletons.