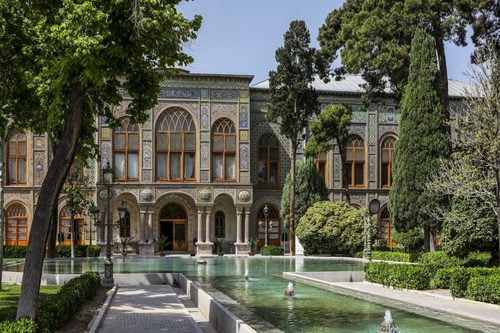 Golestan Palace is the former royal Qajar complex in Iran’s capital city. The oldest of the historic monuments in Tehran, the Golestan Palace (The Rose Garden Palace) belongs to the group of royal buildings that were once enclosed within the mud-thatched walls of Tehran’s Historic Arg (citadel). The Arg was built during the reign of Tahmasp I (1524-1579) of the Safavid dynasty (1502-1736) and was later renovated by Karim Khan Zand (1750-1779). Agha Mohammad Khan Qajar (1742-1797) chose Tehran as his capital. The Arg became the site of the Qajar (1794-1925). The court and Golestan Palace became the official residence of the royal Qajar family. The palace was rebuilt to its current form in 1865. During the Pahlavi era (1925-1979) Golestan Palace was used for formal royal receptions and the Pahlavi dynasty built their own palace at Niavaran. The most important ceremonies held in the palace during the Pahlavi era were the coronation of Reza Khan (1925-1941) in Marble throne and coronation of Mohammad Reza Pahlavi (1941 deposed 1979) in the museum hall. In between 1925 and 1945 a large portion of the buildings of the palace was destroyed on the orders of Reza Shah who believed that the centuries-old Qajar palace should not hinder the growth of a modern city. In the palace of the old buildings modern 1950s and 1960s style, commercial buildings were erected.

The complex of Golestan Palace consists of 13 structures, including palaces, museums, and halls.

The edifice of the sun (Shams-ol-Emareh) 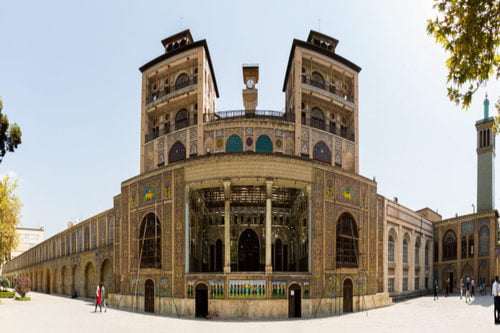 Shams-ol-Emareh is the most stunning structures of the Golestan Palace. The idea of the building at all structure came to Nasser din Shah before his first European and from pictorial images of European buildings. The monarch wanted a structure from which he could have panoramic views of the city. Designed by Moayerol Mamalek, construction on the Shams-ol-Emareh began in 1865 and was completed two years later. The architect was Master Ali Mohammad Kashi. The building has two identical towers. The exterior views have multiple arches. The intricate tile work and ornate windows. This building is a fusion of Persian and European architecture.

The building of wind towers (Emarat-e-Badgir) 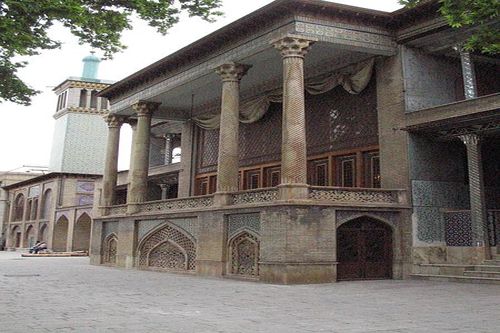 Emarat-e-Badgir was constructed during the reign of Fathali Shah (circa 1806). The building underwent major renovations, including structural changes, during the reign of Nasser din Shah. A watercolor rendering by Mahmood Khan Malek o Shoara depicts the original structure prior to renovations, the building is flanked by two rooms known as Goshvareh (earrings). There is a central room which boasts the finest stained glass window in Golestan Palace. Outside, there are four wind tower of blue, yellow and black glazed tiles and a golden cupola. The wind towers are constructed to allow the cooling wind to move through the structure. 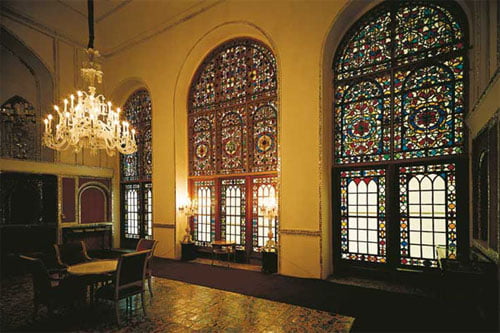 Hall of diamonds is located in the southern wing of the Golestan palace next to the Badgir building. It is called the hall of diamonds because of the exceptional mirror work inside the building. The construction of this hall dates to the time of Fathali Shah (Circa 1806). Nasser din Shah renovated this hall changing its appearance and replacing the hall’s ogive crouches with Roman ones. He also ordered the walls covered with wallpaper, imported from Europe.  As the basic structure dates back to the time of Fathali Shah, it is only. It is only apt that this hall should be devoted to the exhibition of art and handicrafts from that period. 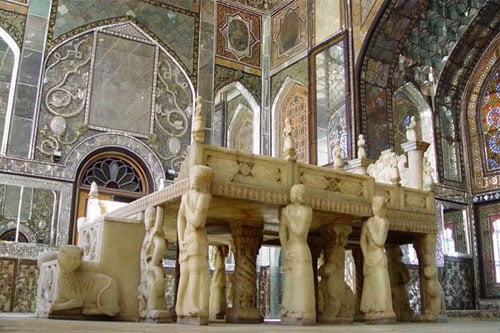 The spectacular terrace known as Takht-e-Marmar (Marble throne) was built in 1806 by order of Fathali Shah Qajar. Adorned by paintings, marble-carvings, tile-work, stucco, mirrors, enamel, woodcarvings and lattice windows, the throne embodies the finest of Iranian architecture. The marble throne is one of the oldest buildings of historic Arg. The existing throne, which is made of the famous yellow marbles of Yazd province. The throne is made of sixty-five pieces of marbles and was designed by Mirza Baba Naghash Bashi (head painter) of the Qajar court. Mohammad Ibrahim, the royal Manson, oversaw the construction and several celebrated masters of the time worked on the execution of his masterpiece. The architectural details and other ornaments of the terrace (Iwan) were completed during the reign of Fathali Shah and Nasser din Shah. Construction of the Qajar kings and formal court ceremonies were held on this terrace (Iwan). The last coronation to be held at Takht-e-Marmar was the construction of the self-proclaimed king, Reza Khan Pahlavi in 1925.

This was originally designed to be a museum after Takht-e-Tavoos (Iranian’s famous jeweled peacock throne) was moved to the royal jewels collection at the central bank, this hall was designated to hold special receptions in the presence of the king, hence the name Talar-e-Salam. Tourists and envoys from European courts Nasser din Shah, spoke of this outstanding hall comparing it to its European counterparts. This hall has exquisite mirrors work. The ceiling and walls are decorated with plaster molding. The floors are covered with mosaic. During the reign of Nasser din Shah, this hall was used to exhibit Iranian and European paintings alongside gifts presented to Iranian court. Royal jewels were also exhibited inside glass cases. These jewels are now housed at the royal jewels museum of the central bank. 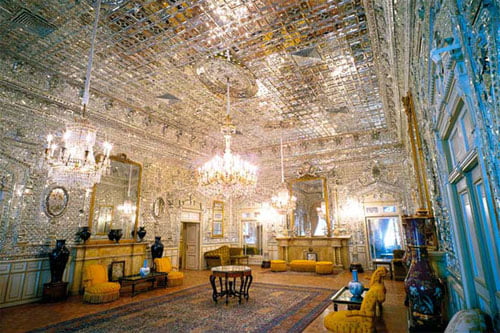 It was named so for it is adorned by the brilliant mirror works of Iranian artisans. The hall was built by Nasser din Shah to replace another hall called Cristal Hall built by Fathali Shah. The crystal hall had been laid waste by the dame. The hall of Brilliance is famous for its mirror work and chandeliers. An oil painting by Sani o Molk shows the decoration of this hall before renovations carried out by Mozafar din Shah and exist in the Golestan Palace. 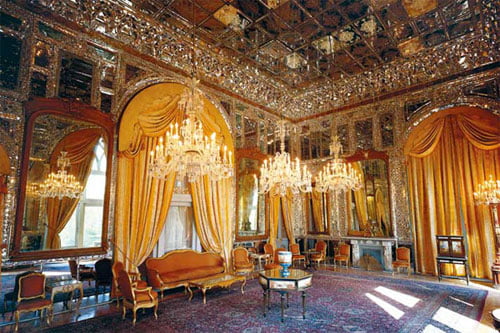 Hall of the mirror is the most famous for the palace’s hall. This relatively small hall is famous for its extraordinary mirror work. The hall was designed by Saniol Molk. 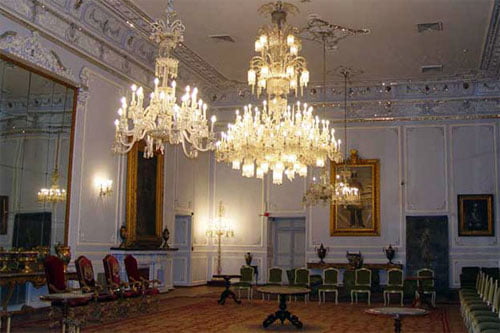 This is a large hall used as a dining room. It was decorated with gifts presented to Nasser din Shah by European monarchs. Among the Golestan palace collection, a watercolor by Malek o Shoara shows the exterior views of this hall during the Qajar period. 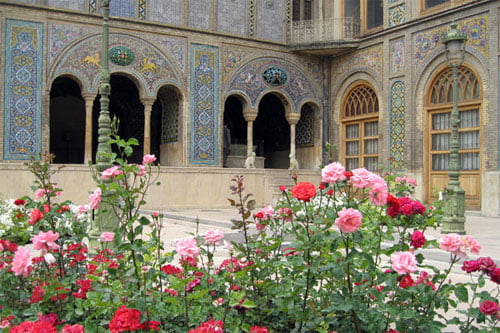 Dating back to 1759, this building was a part of the interior residence of Karim Khan Zand. The basic structure of the Khalvat-e-Karim Khani is similar to Takht-e-marmar. Like the latter, it is a terrace (Iwan). There is a small marble throne inside the terrace. The structure is much smaller than Takht-e-Marmar and it has much less ornamentation. There was once a small pond with a fountain in the middle of this terrace. Water from a subterranean stream (the king’s Qanat) flowed from the fountain into the pond and was later used to irrigate the palace ground. 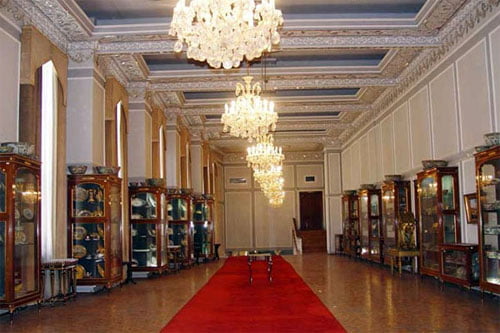 This building replaced the building of Narenjestan in the north of the Ivory Hall (Talar e Adj). All the chinaware that were dedicated to Qajar kings by the European kings were taken to this room and were arranged in showcases which were built for this purpose.

Among the chinaware in this hall, these are the most exceptional: 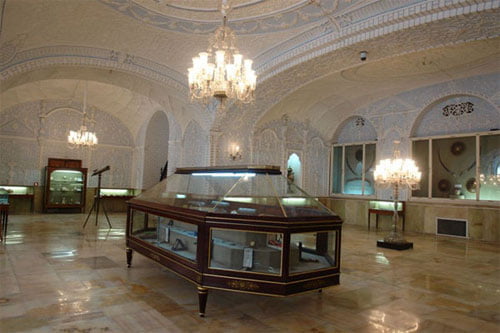 This building is located under the Salam Hall. It is a part of the first Iranian museum, which was built by Mohammad Ebrahim Khan Memar Bashi. Under the reign of Nasser ed-Din Shah, this building was used as a warehouse for the chinaware and silverware which was dedicated to Qajar kings. By the time of the Pahlavi dynasty, this warehouse was turned into a museum to expose the rare gifts which were given to the Qajar kings.

Today, in addition to the gifts, some rare objects are kept at this museum, including: 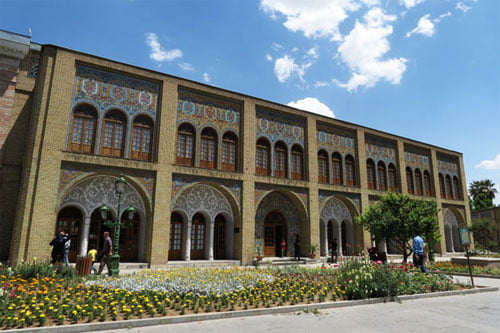 The Ottoman Sultan Abdul Hamid sent precious gifts to Nasser ed-Din Shah, and reportedly, these gifts were copious and enough to fill a castle. The Qajar monarch decided to build an exhibit hall worthy of these gifts within the confines of the Golestan Palace, and eventually, the Abyaz Palace was constructed. It is believed that Nasser ed-Din Shah, himself, designed the structure, with a central hall large enough to house the carpet which was sent by Sultan Abd ol Hamid. Completed in 1883, the Abyaz (“White”) Palace now houses one of the most interesting ethological museums in Iran. It includes a colorful exhibition of traditional Iranian costumes, as well as a folk art exhibition. 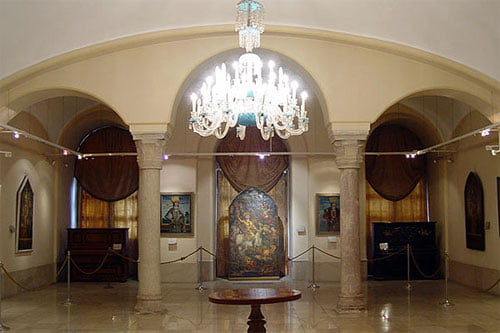 There is an early photographic collection at the Golestan complex which includes photos which are mainly related to the time of the 19th-century progress of photography in Europe. It was created by the order of Naser ed-Din Shah of the Qajar dynasty. It is mentioned that “photography was so common at the royal palace that the king’s wives and his servants also took pictures and posed playfully in front of the camera.” There is a picture of one servant with flowers decorating his head and shoulders.