Officially used in Iran, the Solar Hijri calendar is one of the world’s most accurate calendar systems. It is also known as Persian Calendar, Iranian Calendars, and SH Calendar.

The Persian calendar is a solar calendar with a starting point that matches that of the Islamic calendar.  A number of different calendar systems were used in Persia through the centuries, including the Zoroastrian calendar and the Islamic calendar. The first version of the modern Solar Hijri calendar The origin of the Persian calendar can be traced back to the 11th century when a group of astronomers (including the well-known poet Omar Khayyam (created what is known as the Jalaali calendar. However, a number of changes have been made to the calendar since then. The current calendar has been used in Iran since 1925.

Tied to the Equinox

The Solar Hijri calendar is a solar calendar, meaning that its time reckoning is based on the Earth’s movements around the Sun.

Unlike the Gregorian calendar, which follows a set of predetermined rules to stay in sync with the solar year, the Solar Hijri calendar is based on astronomical observations. The year begins at midnight closest to the vernal equinox in Iran – specifically at the Iran Standard Time meridian at longitude 52.5° east, which runs about 250 miles (400 km) east of Tehran. The first day of the new year is called Nowruz, and it is celebrated around the world by Iranian people.

Tying the Solar Hijri calendar so closely to the astronomical seasons makes it much more accurate than the Gregorian calendar, which, even in its modern form. 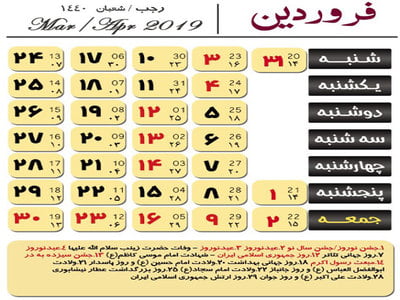 The names and lengths of the 12 months that comprise the Persian year are:

(Due to different transliterations of the Persian alphabet, other spellings of the months are possible.) A year in the Solar Hijri calendar is divided into 12 months of varying lengths. The first 6 months have 31 days, and months 7 through 11 have 30 days. The last month, Esfand has 29 days in a common year and 30 days in a leap year.

When does the Persian year begin?

What years are leap years?

A number of complex mathematical rules have been suggested to determine the distribution of leap years in the Solar Hijri calendar. One of them achieves a degree of accuracy very similar to that of the observational version, requiring about 110,000 years to accumulate an error of 1 day.