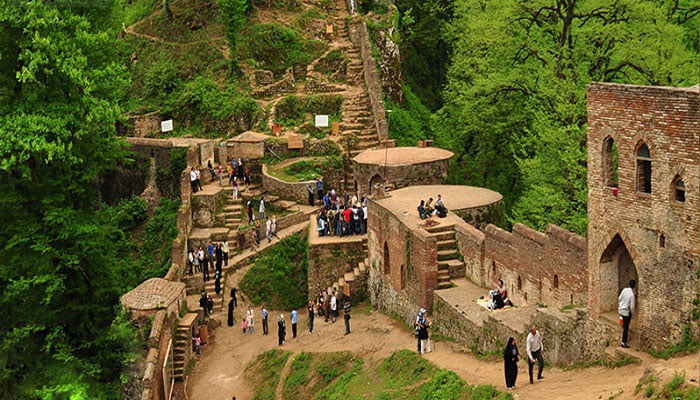 Rudkhan castle dates back to the Sassanid era. It was rebuilt throughout the 11th and 12th Century AD, during the Seljuqid era, and was one of the strongholds of the Ismaili’s. This castle named Roudkhan Castle is also well-known as Qaleh Kohan, Qaleh Hesami, and Qaleh Hezarpelleh. This huge castle is located on the pinnacle of a mountain in the heart of the forest, twenty km southwest of Fouman. A river is known as `Rudkhan Castle River’ also exists near the castle, which originates from the surrounding heights and flows from south to north. Roudkhan Castle used to be one of the important historical castles and a residence of Gilan’s rulers. It is considered as one of the largest and most magnificent historical fortresses of Gilan and even Iran. Roudkhan Castle covers 50,000 square meters and is located at a 600-meter-plus altitude. Its wall is 1,500 meters in length. 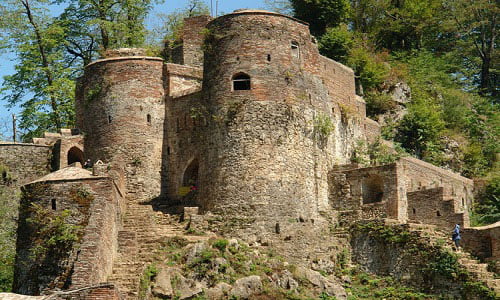 Roudkhan Castle could be called one of the wonders of Gilan’s architecture. Selection of an appropriate location; usage of strong construction materials; application of different architectural styles; formation of a variety of geometrical shapes has bestowed special grandeur to this complex.  After crossing a mountainous winding route with dense forests, the first thing that one notices about the castle is its big entrance gate. The entrance gate is set on the northern wing of the castle and is composed of a gate and two towers on its two sides. There is a plaque on its entrance which reads, “This castle has been built for Sultan Hesamoddin Amir Dabbaj ibn Amir Alaeddin Eshaq between 918 and 921 AH.” 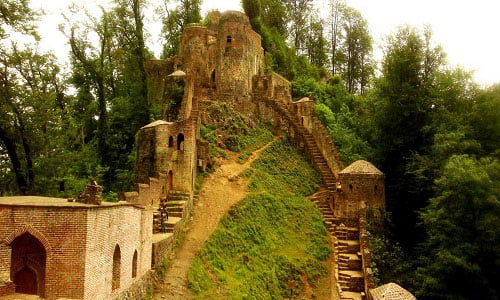 The general form of the castle is irregular and consists of two western and eastern sections. Forty watchtowers surround the castle, while their octagonal chambers are covered with vaulted roofs. Throughout the walls and towers, there are holes with slopes inclined outwards, formed to pour molten substances and boiling water and to shoot at the enemy without being seen. Based on historical evidence, no attacker ever managed to penetrate or conquer this castle, which proves the high skills and technology of the architects of this building in the fields of military sciences and the science of architecture. This castle has two sections, namely one royal residence for the king and royal family, and another residence for soldiers and military activities. The royal residence is a 2-story brick building located in the western section. 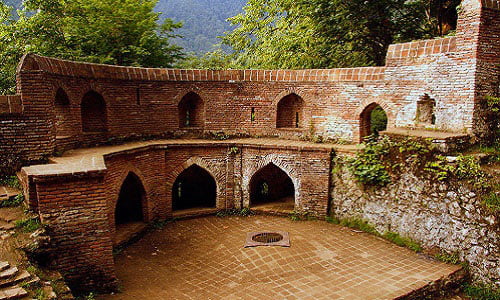 The residences of soldiers are also 2-storeyed and are located in the eastern section of this castle. It completely dominates the surrounding environment. The east side of the Fort is a bit smaller and has more military characteristics. It consists of two towers, another entrance, a prison, and an emergency exit. Above the north and south walls are a number of octagonal areas and the deliberate cracks in the walls of them are assumed to have been for monitoring the adjacent area and shooting arrows at approaching troops. There is a spring in the middle of the castle at its deepest location. This spring was the main water source for the Fort and following an earthquake in Gilan, it ran dry, although since then it has been resurrected thanks to the efforts of Iran’s Cultural Heritage Organization.  In the past, the spring was used by the inhabitants when they were under siege. The eastern section of the castle includes twelve entry gates, a prison, an emergency door, and a bathroom. The western section of the castle also has twelve entry gates. A spring, a pond, a water store; a cool house, a bathroom, and a number of residential units surrounded with towers are the other buildings of this section. 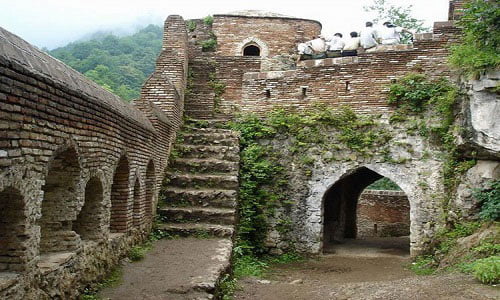 In general, Roudkhan Castle is an important historical monument that has passed the test of time. This castle is currently visited by tourists from Iran and other parts of the world. Roudkhan Castle is one of the most magnificent historical buildings in Gilan province which is located on the crest of a mountain and is called by locals “Zhiyeh Castle”. The whole castle is made of stone and bricks. More vulnerable parts are made of stone and mortar. Most rooms, towers, and dome-shaped ceilings are made of bricks and plaster. An interesting feature of this huge castle is a cobble-stoned staircase among forest trees and you can hear birds singing while going up to them. That staircase has been built by Gilan Province Cultural Heritage, Handicrafts and Tourism Organization for the tourist to reach to the castle and visit it and also you should be a good climber in order to go up from 1700 stairs which reach to the castle. 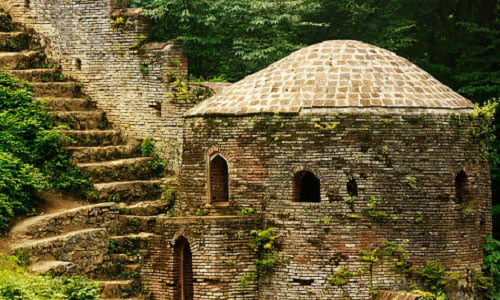