Arg of Karim Khan, the citadel built by the Zand ruler Karim Khan at his capital Shiraz, lay to the northwest of the old town, not far from the Bagh-e Shah gate and at the intersection of the Darb-e Shazde and Meidan-e shah quarters. It was built as part of a complex during the Zand dynasty and is named after Karim Khan, and served as his living quarters. In shape, it resembles a medieval fortress. At times, the citadel was used as a prison. Today, it is a museum operated by Iran’s Cultural Heritage Organization.

Arg-e-Karim Khan was built in 1180 AH. Karim Khan invited the best architects and artists of the time and bought the best materials from other cities and abroad for the construction of the citadel of Karim Khan, which was quickly constructed. Large mirrors from the lands of the Russians, Ottoman Turks, and Europe were imported and installed. He had this castle erected on the best site in the city and assembled architects, bricklayers, carpenters, masons, painters, and other craftsmen from all parts of the country to do the work. During the Zand dynasty, it was used by the king as living quarters. 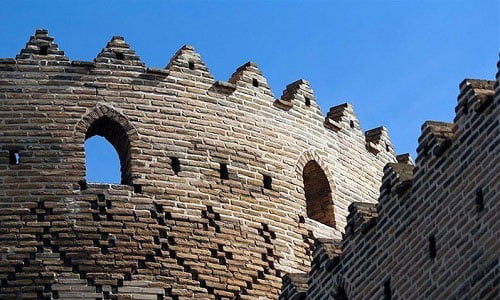 During the Qajar period, it was used as the governor’s seat. Karim Khan Castle is located at Shahrdari Square. It has a land area of 4,000 m and is in the center of a 12,800 m compound. The Citadel of Karim Khan consists of four high walls connected by four 14 m round brick towers at a 90-degree angle. Each 12 m walls is canalized and is 3 meters thick at the base and 2.8 meters at the top. The design of the citadel combines military and residential architecture, for it was the home of Karim Khan and the military center of the dynasty. One of the round-break towers is a little bit different from others and they know it as a pizza tour in Iran. 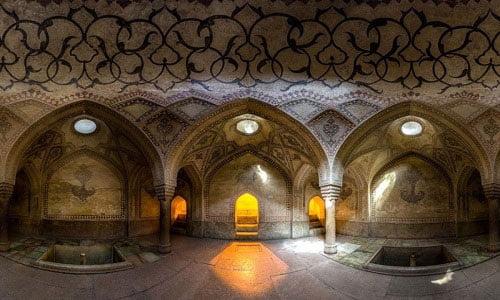 Architecturally the Arg is a large and lofty, rectangular building, originally surrounded by a moat said to be as broad and deep as the moat on the edge of the city. At each of the four corners are round towers in the form of truncated cones. The only entrance is in the middle of the east wall, behind which are corridors, guardrooms, and bath. The rectangular courtyard contains two pools and a garden. In the middle of the north, west, and south sides of the courtyard are three big verandas, each fronted by two tall stone pillars. Flanking each veranda are halls, large three-door rooms, and stairways leading to small rooms and verandas on the floor above. At each of the four corners of the citadel, there is a small private yard giving access to the adjacent fortifications and rooms. Tile works depicting legendary tales were added at the entrance gate of the citadel during the Qajar Era. 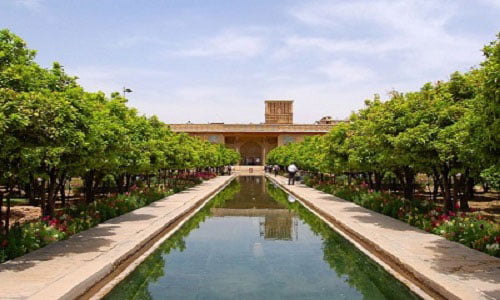 The Arg has foundations, lower walls, pillars, and pavements of stone; the rest of the structure is baked brick, with wooden doors and rafters. The bases of the outer walls and towers are faced with rough-hewn square stones, while the upper portions of them are faced with interlaced brick ornamentation. Above the entrance on the east wall, a battle scene in seven-color glazed tile depicts Rostam in combat with the white demon. Inside the Arg is a large, open courtyard filled with citrus trees and a pool. A dusty museum of the Zand period, with wax figures in traditional dress, occupies rooms off the northwest veranda.  There are numerous buildings within the castle compound. The north building was used in the winter, while the south was for summer use, and the west served all seasons. 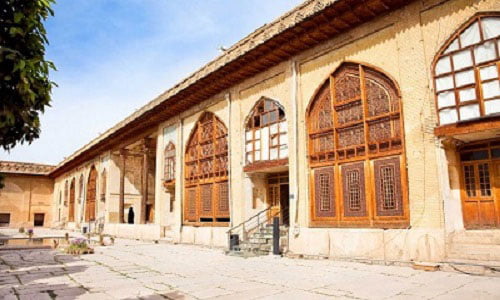 The rooms have beautiful decorations which are typical of buildings during the rule of Karim Khan. It has four circular towers on the corners, one of which on the southeastern side has a distinctive slope. Decoration of this complex has been destroyed. There is a large tile depicting the scene of the killing of the white devil by Rostam (a hero of Shahnameh, a masterpiece by Ferdowsi) at the entrance gateway of the citadel. There are fountains (still in operation), flower and vegetable gardens and fruit trees.

The interior decoration once included marble from Yazd and Tabriz on the lower parts of the walls of the veranda and halls and Shirazi-style patterns painted in gilt and lapis lazuli on the plastered surfaces of the upper parts and the ceilings. The lower parts of the courtyard were adorned with large carved stone panels, and throughout the building, there were ornamental wooden skirting boards beneath the marble panels. The Arg was the residence of successive Zand rulers, and its towers were sometimes used as prisons. In the Qajar period and the early years of Pahlavi rule, it was the seat of the governor’s general of Fars. In 1901 a hut was built on the site of the long pool in the courtyard by order of the governor general Malek Manṣur Mirza. After the erection of the modern governor general’s office, a building was erected on its eastern edge and used as the city’s police headquarters and prison. After the fall of the Qajar Dynasty, it was converted into a prison and the paintings were plastered over the renovation of the citadel started in 1977. And some of the painted panels and colored windows were restituted. 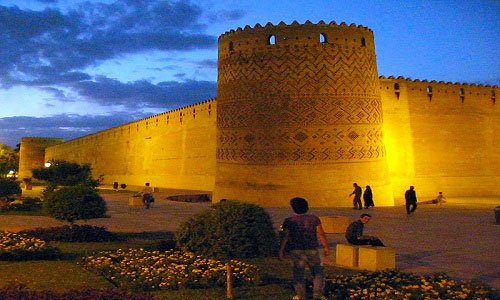 There are many similarities between the Karim Khan castle and Alhambra citadel in Canada, Spain. Alhambra was built in the mid-11 centuries to a Muslim ruler, like Karim Khan. They both build their citadels with Islamic inspirations. The main reason for building these castles was to be a hub for the kings to reign. Inside of these two citadels is gardens. But the obvious similarity is the pool. Both contain a pool throughout the area. Although these citadels are very alike each other, there is no proof that indicates these buildings are linked together. It’s just a scarce event.