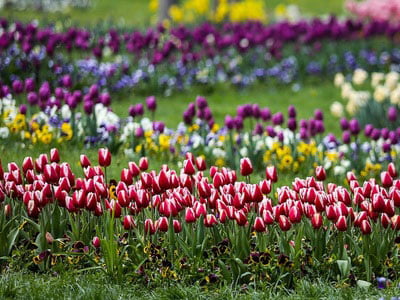 Being a vast land with diverse climatic conditions, Iran is one of the largest producers of ornamental flowers like a tulip in the world.

Iran is probably one of the most intense flower growing countries. Since ancient times, Iranians have had a custom of presenting flowers as gifts on various occasions.

While selecting the flowers, they give utmost importance to the meaning conveyed by that particular flower.

Anyone visiting Iran for the first time will notice how much outdoorsy Iranians are, never missing the occasion to just get out in the fresh air, and as it happens when you are abroad, it’s hard to resist the temptation to join the locals. 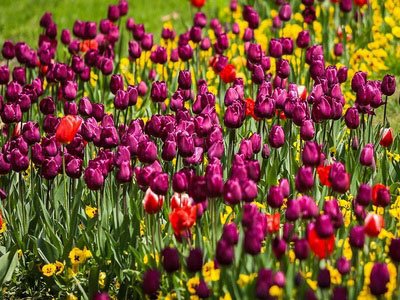 This pretty flower abounds in the Zagros mountain range. It is found in Chaharmahal-Bakhtiari province as well as in the western and southern provinces of Iran. The flower sprouts on the plains of Iran from the middle of March. The full bloom of this flower is spectacular, as it creates a red and green carpet. But its life is so short and during this month a lot of travelers come to visit this wonderful spot every year.

During this period, a lot of travelers visit areas where this wonderful flower blooms. 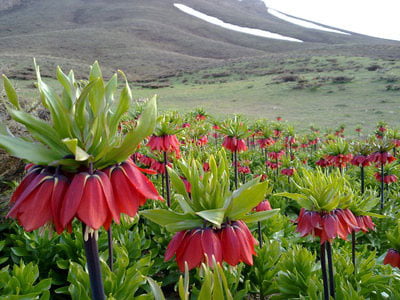 In fact, many festivals of inverted tulips are held every year in the provinces where they grow. However, the flower’s lifespan is short and endangered by overgrazing and its use as medicine. It is picked in large amounts for feeding livestock. Experts believe the expansion of farming in the area where inverted tulips grow also threatens the flower. Spring season in Ordibehesht (May) month is a heaven of Iranian tulips. The Origin of this pretty plant is around the Zagros Mountains. This flower was taken to Austria for the first time by some European tourists in 1576, then Europeans were familiar with these beautiful flowers. In the 19th century, its cultivation spread in Netherland. Reports indicate Iran ranks 17th in the world in terms of the total area under cultivation of decorative flowers.

Crowded, chaotic, noisy and polluted, Iran’s capital can also be very green. It might be Iranians’ love for nature or the municipality’s firm resolution to put an end to the soaring pollution levels that are becoming increasingly worrisome, but it seems that all kinds of gardens and parks are taking over and conspiring in creating a green Tehran. While Tehran has lovely weather in the first month of spring with occasional evening rains, the municipality has decorated most of the park and streets with tulips. Findings suggest that cultivation of the tulip began for the first time in Persia, probably in the 10th century. Apart from the huge meadows around Tehran, the parks inside the city are more intended for relaxing and chilling out rather than playing or sunbathing. Usually bearing a specific theme, they all are well equipped with benches and cafes.

The symbolic meaning of Tulips While the current Iranian uprising began as a green revolution, it is quickly turning red. With each death at the hands of the regime, a martyr is born, and with each martyr, the seed of revolution is planted. According to Shi’a legend, where the blood of a martyr spills, a red tulip will bloom. And in a culture so intensely steeped in symbolism, it could very well be these tulips that determine the next chapter in Iranian history.

Shi’a Muslims, who make up over 95% of the Iranian population, observe the 40th day after death as a highly significant day of mourning. As a result, the 1979 Islamic Revolution often progressed in 40-day intervals. These dates frequently sparked the greatest protests and demonstrations throughout Iran. From Qom to Tabriz to Tehran to Shiraz, people poured into the streets to honor their martyrs. And with each procession, new martyrs were created and this cycle repeated itself until the revolution finally succeeded.

Thus, another Iran was born, one with a crimson tulip at its core. A single word in red Arabic calligraphy graces the center of the current Iranian flag, deliberately shaped in the outline of a tulip: “Allah.” Tulips are delicate flowers by nature. A mild wind properly timed can prove fatal. But tulips do not die. They are perennial. 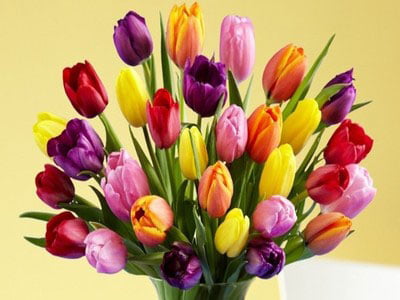 Like many flowers, different colors of tulips also often carry their own significance. Red tulips are most strongly associated with true love, while purple symbolizes royalty. The meaning of yellow tulips has evolved somewhat, from once representing hopeless love to now being a common expression for cheerful thoughts and sunshine. White tulips are used to claim worthiness or to send a message of forgiveness. Variegated tulips, once among the most popular varieties due to their striking color patterns, represent beautiful eyes.