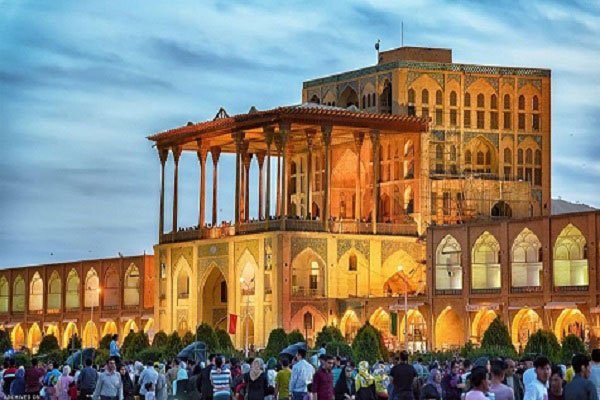 Ali Qapu Palace: On the west side of the Imam square in Isfahan and right in front of the Sheikh Lotfollah Mosque attracts a fascinating and spectacular mansion, a six-store building dating from the Safavid era and one of the most important architectural masterpieces of the early 11th century AH. Named Ali Qapu after the Safavid it was the largest building in the capital and glowed like a diamond in Isfahan. What has made the building an astonishing attraction is not only its historical age but its eye-catching decorations that dazzle every eye. The artistic plasterwork on this building has been done at the height of elegance, depicting one of the masterpieces of Iranian art. In the past few decades, the high-rise building of Ali Qapu with a height of about 36 meters to the floor of the market in Isfahan was considered the tallest multi-stores mansion in the city and its stature was very spectacular.

After King Abbas I transferred the Safavid capital from Qazvin to Isfahan between 1594 and 1598, construction began as the headquarters and government building of the Safavid monarchs. What we know as the Ali Qapu was actually the entrance to the Safavid government which was initially simple. Ali Qapu served as the central gateway and gateway to the palaces built and expanded during the Safavid era in the Naqsh e Jahan Square (Imam Square). This gateway connected the Naqsh-e Jahan Square to the complex of the State House of Commons and the Mansion of the House of Commons, the Front of the House, the Timurid Hall, the Twilight Hall, the Indoor Hall, the Chehelston Palace, etc. There is no information on the date of the beginning and end of the Ali Qapu. According to existing beliefs, the two buildings were completed at the time of the construction of the Imam Mosque in Naqsh-e Jahan Square. Some historians believe that the great foundation of Ali Qapu dates back to the Timurid period and that King Abbas made it.  Archaeological excavations by the Italian delegation of Izumo (under UNESCO’s supervision) in the Pahlavi period showed that the great monument of Ali Qapu dates back to the Safavid period, and it cannot even be imagined that part of it belongs to the pre-Timurid period. Crude brick walls in some parts of the building, especially on the southwest side of the building, have signs of the Safavid era and are far from the remnants of the original wall or fence. In other words, the investigation showed that the Ali Qapu was built as part of the square plan at the request of King Abbas I. The palace was completed and expanded during five stages of architecture and between 70 and 100 years under the successors of King Abbas I, especially King Abbas II and King Solomon. Even according to inscriptions on the Nastaliq line, during the reign of King Sultan Hussein, the last king of the Safavids, third-floor decorations have been enlarged or refurbished. 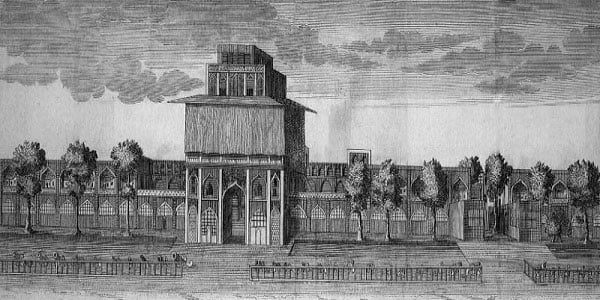 The Ali Qapu was built only as an entrance to other buildings and collections of the royal palace and was formed at the same time as the construction of the palace complex. The palaces were then buildings surrounded by lush gardens, used only by the king and courtiers for ceremonial, administrative, judicial, and naval affairs. These buildings also had space for the king’s living room, furnishings, royal stables, guards, royal clinic, etc. Such a large complex needed a proportional entrance that would preserve both these buildings and the context of the new city chosen for the capital. The upper building of Ali Qapu was a large rectangular cube measuring about 20 x 20 and 13 m high and had two floors inside. Up to 6.5 meters high, no windows were seen outside, giving the building a different look. At that time, the market building was only one store with a height of 6.4 meters. Shops were formed at the end of each crater, and the front was open to the field. It was smaller than the current size to be used as a porch for commercial purposes.

Second step: Expansion of the building 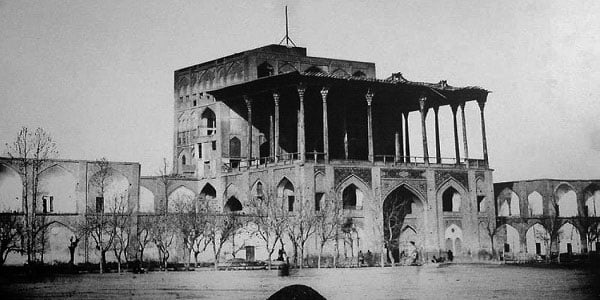 The expansion of the capital and the increase of the urban population and the necessity of making the headquarters important, all led to the expansion of the capital and the addition of the class. The arches were expanded into the square and a floor was added. With these changes, a row of porches was created on the upper floor that changed the shape of the building. The vault around the square was two-storied and the third, fourth and half floors of the fifth floor were constructed at this stage. At this point, a simple entrance was transformed into a ceremonial building overlooking the square, a place where the king’s guests were welcomed and watched the parade of soldiers and matches performed in the square. 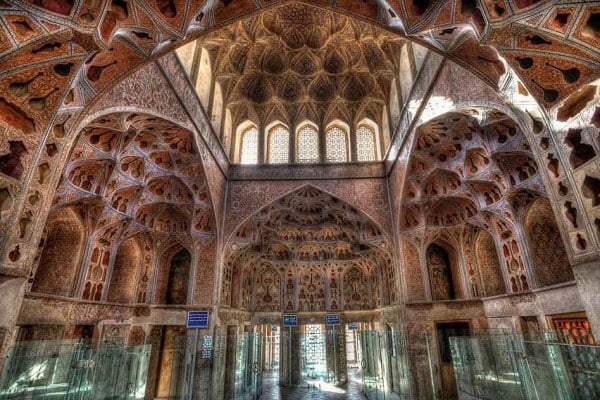 New sections were added at this stage so the palace could provide short-term accommodation to court guests. The last floor known as the Music Hall was added to the building and the palace-shaped tower building was created.  This floor was very different in structure to the lower floors and was treated to extraordinary decorations and different uses.

To increase the length of the palace, a promontory was created east of the building, with a porch facing the square. Of course, the porch or royal booth was created by the creation of the first adjoining floor, but with time and increased use of the playground, it no longer seemed sufficient. The square, which was the sole host of merchants’ tents, was now also used as a soldier’s homestead, and the pavilion set up in the earlier stages with a porch and third-floor lounge could not be a good place to watch these performances. This booth was too far behind to watch the soldiers line up and play polo and didn’t have a good view. So they decided to build another volume in front of the market about 7 meters ahead. At this stage, they also expanded the entrance to the building to host a high level of celebrity guests, ambassadors, and celebrities during the festivities.

eighteen columns were added to the porch, and a wooden ceiling was mounted on them. King’s staircases were also built to provide access to the area. The construction and completion of the water supply system for the transmission of water to the floors, especially the Copper Ivan Basin, was also carried out at this stage. At this stage, it was best completed and met all the needs of the court.

Ali Qapu after the Safavid Dynasty

In the aftermath of the Safavid, the palace was neglected and damaged. During the Qajar period, the building had been the workplace and residence of Zul Sultan, the ruler of Isfahan, for several years, and he made changes to the building. The invasion and invasion of Afghans and various wars and the transfer of the capital from Isfahan and the neglect of the rulers after the Safavid all caused wounds on the mansion. This structure rescues all these pains, and one can still see the beauties and paintings of the Safavid era. Interestingly, a large part of the ornaments has remained original and no alterations or seizures have taken place.

When we speak of Ali Qapu, we refer to an architectural masterpiece that has certain characteristics:

Ali Qapu reaches 3 meters and its floors are connected by three staircases. Two symmetrical staircases are in a spiral on the northwest and southwest sides of the building. The number of steps from the ground floor to the roof of the building reaches 114 and 94 reaches the top floor of the music hall. The height of the stairs starts from 22 cm and in some parts reaches 32 cm. The internal width of these stairs is one meter and this amount is reduced to 85 cm on the top floor. From the architectural point of view, spiral stairs play an important role in enhancing the strength and stability of the building, and the excellent Ali Qapu is no exception. In taller buildings, there is less space for spiral stairs to be built, leading to taller palace stairs. this staircase could only be used by crews and guards and soldiers to reach the other floors of the building as soon as possible from the ground floor. Another point is that only these stairs can reach all floors from behind the building. There is also a solution for this number of stairs and people’s tiredness; visitors can step out of the staircase on any floor, set up on the balconies in the west and relax a bit. As the ceremonial aspect of the building evolved, the service departments and sub-spaces were inadequate; what was appropriate for a watchman could not meet the building needs of the king and the elders. The issue of the staircase and its access to the hall floor, and especially the large porch, was raised here because the two spiral staircases did not look so good. The first adjoining staircase was formed on the south side of the building, which reached the hall floor without interruption. These stairs were not very comfortable and had the same quality of circular stairs so they did not have to grope. There are traces of this staircase on the ground floor. Next, the royal stairs were formed, which begin with covered floor space and reach the stairwell after crossing the rooms and stations. King stairs are multi-stores tiled stairs that start from a relatively large room on the first floor (left ground and southwest side of the building) and reach a decaying space or room. This was a place for people who wanted to meet the king and had an area of about 26 square meters and a wall or fireplace.

What makes Ali Qapu so special is the beauty of the decor that cannot be easily overlooked. Exterior decorations on this building are made of brick. These brick structures are adorned in crescent sections at the top of each entrance or the same latches with seven-color tiles and ornaments and slim lines. The beautiful motifs of flowers and bushes and hunting grounds, animals, birds, etc. on the plaster are part of the interior decorations in which the art of slate is evident.