Situated in the middle of a garden on the southeastern city of Nishapur, the mausoleum of Persian polymath Omar Khayyam (1048-1131) draws many domestic and foreign visitors each year.

Omar who is known among Iranian by his last name Khayyam was born and lived in Nishapur, an old city in the eastern province of Khorasan Razavi, where he now rests.

Though his life was mostly dedicated to scientific works, Khayyam is mainly known by his Rubaiyat (quatrains), a poem comprising four lines. 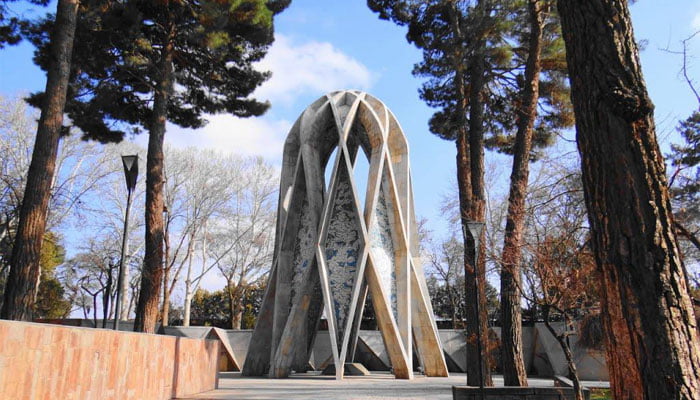 Mausoleum of Omar Khayyam is situated in the middle of a garden on the southeastern city of Nishapur.

Rubaiyat of Omar Khayyam is centered on concepts such as the transience of life, the importance of valuing this short journey and so “seizing the moment”. The Rubaiyat became popular outside Iran when it was rendered into English by English poet and writer Edward FitzGerald (1809-1883).

Omar’s current mausoleum is 22 meters tall and enjoys a beautiful combination of classical and modern Iranian architecture. It was designed by celebrated Iranian architect, sculptor and painter Houshang Seyhoun.

Completed in 1963, the monument is surrounded by evergreen pine trees of a large garden that is also named after the poet.

Persian poet and prose writer Nizami Aruzi (1110-1161) who was Omar’s friend and student has quoted Khayyam saying about his burial place that he had wished to be buried in a place where every spring the breeze carries flowers to his grave. A story that Seyhoun did not overlook when deciding on the exact spot for the monument.

Seyhoun erected the structure in the vicinity of apricot trees in an open space where in spring the wind can easily get in, take up the blossoms and present them to the poet.

Before the construction of this monument, Khayyam rested in a simple room adjacent to the Mohammad Al-Mahruq Mosque; a beautiful blue dome belonging to Timurid (1370-1507) and Safavid Dynasty (1501-1722) that is now within the Khayyam Garden.

In his design of the mausoleum of Omar Khayyam, Seyhoun made an effort to reflect the three most important facets of the poet’s life: mathematics, poetry, and astronomy.

The monument, erected on the poet’s tomb, somehow resembles a tent referring to the occupation of Omar’s father which involved sewing tents. A job that gave the poet the family name of Khayyam that originates from the Persian word “kheyme”, meaning a tent. 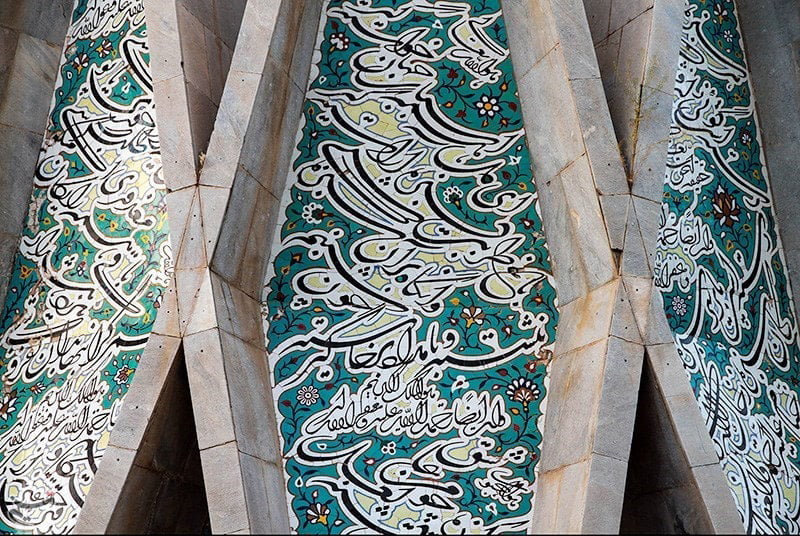 In and outside the mausoleum is embellished with amazing tile working. The tiles have engraved on a handpick of the poet’s Rubaiyat written in Shikasta Nastaliq (Broken Nastaliq), a predominant style in the calligraphy of Farsi alphabets. This was the first time that this style of Farsi handwriting was invited to enhance the beauty of an architectural structure.

The structure has been erected on ten spindles, from each two lines move upward diagonally forming diamond shapes on their way to the top where they rejoin and give the building a dome-like look. If looked upon from the sky, it looks like a flower in the middle of which is a five-wing star.

Mausoleum of Omar Khayyam was added to the list of Iranian National Heritage in 1963. 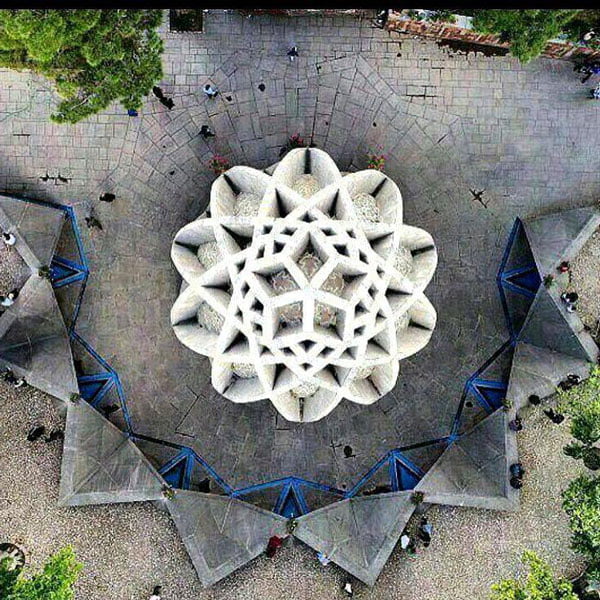 If looked upon from the sky, Khayyam’s mausoleum looks like a flower in the middle of which is a five-wing star.

The garden surrounding the mausoleum of Omar Khayyam has more to offer to enthusiastic visitors; a museum, a tea house, which many claims to be serving the best tea in the country as well as a small souvenir shop. The small shop sells legendary Persian turquoise used in a variety of jewelry.

The museum consists of four sections. The first section is dedicated to astronomical instruments, like astrolabes and compasses while the second section displays metal and bronze utensils contemporary of Omar Khayyam. The third and fourth sections have on show antique glazed pottery and pictures and manuscripts on astrology attributed to Omar Khayyam.

During the years of his artistic career Houshang Seyhoun (1920-2014), designed two other mausoleums, one is home to the resting place of Ferdowsi, the author of Shahnameh (Book of Kings) who lived during the Ghaznavid Empire (977-1186). Ferdowsi’s tomb is located in Khorasan Razavi Province.

Consisting of about 50,000 verses, Shahnameh is the longest epic poem written by one poet in the world which tells the story of ancient Persia and its kings in an artistically exaggerated fashion.

Seyhoun erected the other mausoleum in Hamedan Province over the tomb of the world-famous Persian polymath Avicenna who is known as the father of modern medicine.

Tehran’s Central Railway Station was designed by Seyhoun as well.