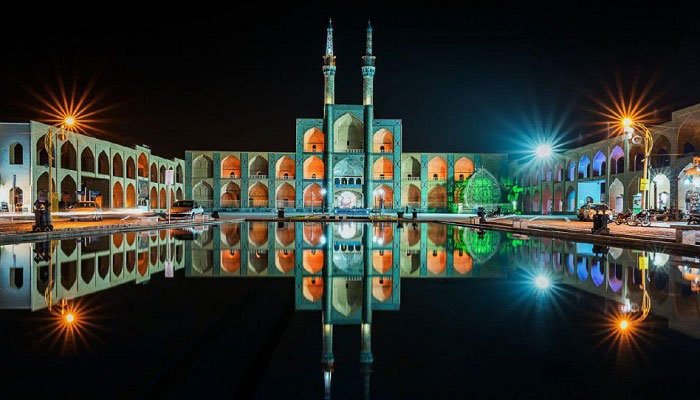 Amir Chakhmaq Complex in Yazd is a place you cannot leave the city without visiting when traveling to the Windmill. This square is a symbol of the city of Yazd and in addition to its historical and cultural significance is also important to the people.

Amir Chakhmaq Square, work from the ninth century AH and the time of the Timurid rule over Iran and was built by Amir Jalaluddin Cheshmeh.  He was one of the commanders and rulers of Shahrokh Teimurid, after coming to Yazd, in collaboration with his wife, Seti Fatemeh Khatun, to build a complex consisting of aisles, a square, a public bath, caravanserais, a khanghah, aqueduct, and a cold water cave well. The most important of these buildings was a mosque by the name of the New Jami Mosque in a place called Deh or Koi Duhok Low. He also built a large square in front of the mosque to give it a different look. That square became known as Amir Chakhmaq Square from that time, and shortly afterward, it was also called the Amir Chakhmaq Mosque.

The square was also known by the same name in the Safavid era. During the reign of Shah Abbas, changes were made to the complex, one of which was the construction of four stairs on the inn. In the early 13th century, the square in front of the mosque and the bazaar became the Husseiniyya; however, it was probably not used because Husseiniyeh was still not used today and the construction of such spaces from the Safavid period onwards became common in Iran. During Fath Ali Shah Qajar’s personal name, Haji Hussein Attar added a section to the mosque and repaired parts of the mosque.

Prior to the Pahlavi era, like many other squares, Amirchakhmaq became a tomb for the dead, and some people buried their dead there thanks to the presence of Husseiniyah. When the Pahlavi came to power, from the earliest years of the government, it was stopped and after the destruction of the tombs, the field returned to its original form. During this period there were many changes in the field, most of them related to the time of Reza Shah. The Pahlavi period was one of the major factors in the change that caused the wall to be demolished. As a result, a small field is defined and the Amirchakhmaq Mosque merges with Hosseinieh Square. Subsequently, after many developments, the southeast body became the only remaining wall of the field, which is the main body of Amirchakhmakh’s leaning.

Amir Chakhmagh Square has a wide range and includes the following monuments:

Amirchachmaq Mosque (The oldest building in this field) 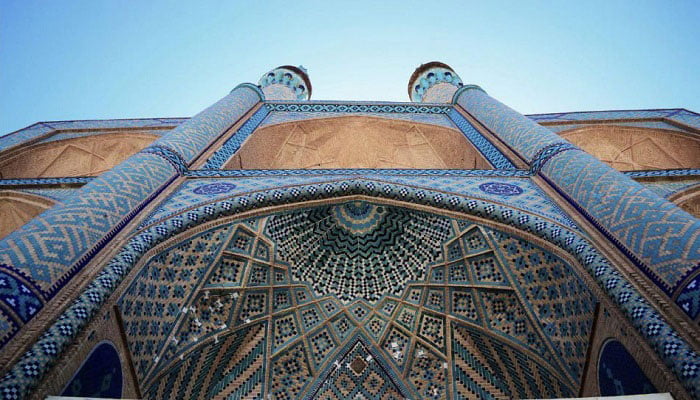 The Amir Chakhmaq Mosque, also known as the New Jame Mosque or Duhok Mosque, is the oldest building in the Amirchakhmaq complex, located on the south side of the square. This mosque is the second only after Jame Mosque of Yazd. The Amirchakhmaq Mosque was a little further from the urban context until the time of Mohammad Shah Qajar, but it eventually entered the urban context. One entrance to the mosque from the adjacent alley, and the other way into it, is from the courtyard of Sati Fatima’s monument; there is a shared courtyard between the monument and the mosque. The mosque has two winter and summer yards. In the summer it is on the top of a very beautiful windward altar which is on the southwest side overlooking the alley. The interesting thing about the winter dormitory is that it is located on both sides of the entrance corridor and is lighted with marble.

The historical palm of Amirchakhmaq 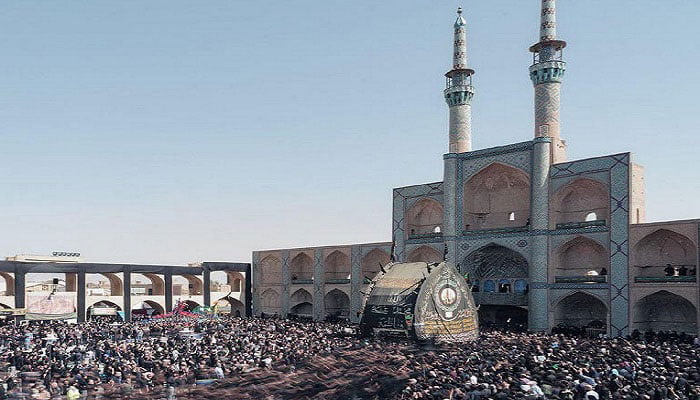 The palm tree is a huge wooden casket carried by people in a palm tree ceremony and symbolizes the Muharram mourning ceremony. One of the most spectacular features of Amirchakhmaq Square is the presence of a large palm in the east known as the Heidari palm. According to Abdul Hussein Ayati, a contemporary poet and writer, the palm dates back to the Safavid period 450 years ago and has been in this place since 1229 AH. Some consider this palm to be the oldest palm and some others refer to it as the oldest palm. This palm is made up of a lattice set of carved wood with large Chinese knots and beams and its overall shape is cedar tree (symbol of freedom).