February 6, 2020 by Ghazal Afshar About Iran, Desert, Museums, Other 0

Background of pottery art in Iran

The art of ceramics is the skill and beauty of making earthenware and other objects from baking. Pottery has been around for thousands of years and has been found in human habitation since prehistoric times and has been associated with the evolution of human life. The inhabitants of Mesopotamia started farming nearly 10000 years ago, and the red pottery vessels from that time represented their living tools, the skills, the artistry they used to produce them. 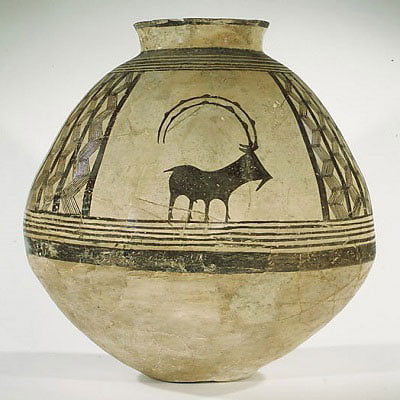 Pottery, one of the earliest man-made handicrafts, has become important over time with historical and social developments in the area of production, sex, shape, color, role, the technique of manufacture and use. Remains of pottery remnants from a very long time associated with dwelling on the Iranian plateau have made it possible for different ethnic groups by constructing “gray pottery” in northern societies, “pea pottery” in western societies, and “clay pottery” in Ilam civilization. The role of these vessels is first observed on the outer surface of the container and subsequently on the inner surface. Most of these containers are in the form of bowls, base jars, mugs, and animal-like containers.

Prehistoric potter paints shapes, animals, and humans on earthenware with simple lines. Archaeological studies show the artist of the time, with parallel wavy lines in a circle and rectangle, to the water and the triangle on which the surface is intersected, to the mountains and squares divided by horizontal and vertical lines and the wavy lines drawn therein, probably refers to farmland and depicts animal motifs including goats, rams, deer, cows, birds.  The motifs used first included geometric shapes and then the role of animals such as goats, rams, horses, cows, leopards, bears, deer, rabbits, fish and birds such as goose, stork, duck, and later factors in life. One of the historical sites to be explored is the Treasure Valley in Kermanshah Province, whose findings date back to the 8th millennium BC. In a place called the Belt Cave in Mazandaran, a Neolithic pottery dish known as very soft pottery cooked at low temperature. Another cave near this cave is pottery called Hutu, which resembles pottery in the Cheshmeh Ali area of Ray.

The art of pottery in pre-Islamic Iran 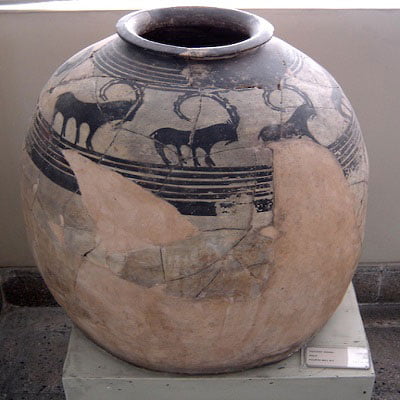 Archaeological findings in four important pottery areas in Iran: Zagros Mountains (Lorestan), South Caspian Sea (Gilan and Mazandaran) North West (Azerbaijan) and South East (Sistan and Baluchestan) plus the desert region of Iran has shown that Eighth BC pottery was flowing in these areas. The Susa hills do not only contain the Susa itself, but the clay pots that cross the Musa hills within 160 km of Susa and the Sumer and Taleh in Iraq and the northwest of Hindu and Baluchistan, or the Iranian plateau in the hills and hills, or in the east to Anaheim, which is in Turkestan, is called this floor and pottery of Susa.

Archaeologists unearthed a large number of pottery and other objects in a region from the east of Iran to Iraq and from the Caucasus to the Indus Valley. The pots of history found in this vast region are almost unbelievably sophisticated in the style and style of construction, almost uniquely transformative and technically sophisticated. The earliest examples are from Susa, the first settler.

The emergence of pottery wheels

Examples discovered in Silk-Kashan show that prior to the invention of the wheel in the fourth millennium BC, the art of baking heat-controlled baking with more finesse and in more varied forms more skillful and decorative than ever before. It was also the shape of animals and flowers. But with the invention of the advanced wheel in the manufacture of containers in regular and symmetrical shapes and with the improvement of quality. During this period, first, the wheels were slow-rotated and then the wheels were made fast. Many sophisticated wheeled pottery vessels have been found in various parts of Iran, reflecting the economic and cultural interconnections between the tribes of that time. In the third millennium BC, in the ancient areas of Yannik Tapeh in Ardebil, Torang Tapeh in Gorgan, Tapeh Hessar in Damghan Gray Pottery, and in the middle of the second millennium BC, shiny gray pottery was spread on the Iranian plateau. The technical sophistication and sophistication of pottery making and decoration have been identified. In the second millennium BC, containers containing simple ornamented bowls and pitchers were found in gray, dark gray, red and brown, and some with geometric shapes. Some of this pottery is used for household purposes and some for religious ceremonies, the type of consumption of which can be identified. Construction of these trenches continued until the first half of the millennium BC. 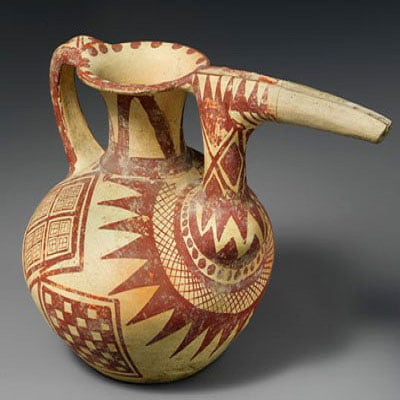 Since the early millennium BC, archaeologists have found specimens of earthenware made in the central Iranian plateau in the Zagros Mountains, and samples of the Gayaneh and Godin Hill containers or the Fars and Khuzestan imprints in the Zagros Mountains. Evidence suggests that since women were the major pottery makers when they migrated to tribes belonging to their wives, they moved to other areas for making pottery and decorating their homes.

Pottery in the Median and Achaemenian period 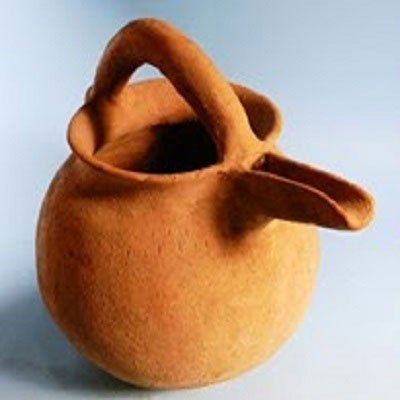 Information from the Median period is limited. Excavations at the Noosh Jan Hill in Malayer have uncovered many vessels and are said to be under investigation. In Bistoun, areas of Kurdistan in Ziviyeh are also examples of this period. One of the most important innovations in pottery at this time is the creation of ceramic vessels. The use of glazes in Iran at the Ziggurat Temple on glazed bricks goes back to the 13th century BC. The glaze with the advent of the Achaemenids in the sixth century BC was accompanied by great advances. The finer simple dishes have evolved a lot, and the new horned cup shapes have evolved from watch-ware and pottery designs. Some of the early forms still remain, the same as the animal designs that were worked on the handle of the container and had the iconography. At this time the techniques used in pottery were similar to those of metal. It was at this time that the glaze entered the Iranian plateau. Excavations in the Persepolis area indicate that the walls were covered with enameled bricks and decorated with animal and soldier shapes.

Laldjin is one of the cities of Bahar city in Hamedan province due to its suitable clay soils as one of the major ceramic manufacturing centers of Iran and the world and it is known as a ceramic manufacturing center in the Middle East. Lalejin pots contain a variety of decorative and consumable dishes. The pottery of this region is marketed without a single glaze. In terms of soil and type of glaze is relatively better than other parts of Iran. The colors of glazes made in Hamadan are often azure, blue, navy, henna, yellow, green, turquoise and brown. Lalegin earthenware is mostly wheeled, but molding and grouting are also done, and sometimes trimming, cutting and adding is done on raw bodies.