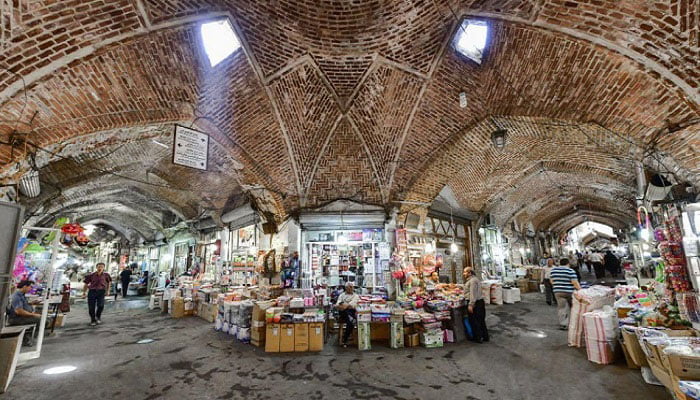 We begin our journey to the land of the firsts and head to the largest indoor market in Iran and the largest collection of roofed and interconnected bricks in the world; An ancient market with a length of one kilometer that has passed through various historical events and today has reached us as a valuable heritage. Tabriz Bazaar has 6500 rooms, 40 types of jobs and classes, 20 rows, 35 houses, 25 Timcheh, 11 corridors, and several schools, mosques, caravanserais, and baths, all of which together have created the most complete social organization among the Iranian markets. Most of the goods that are sold in the Tabriz market have a traditional atmosphere and there is no news about advanced goods such as computer equipment, etc. in the market. The most important items sold in the historical market of Tabriz are handmade carpets of Tabriz and Azerbaijan, leather bags and shoes, spices, herbal and medicinal products, nuts, fabrics, glass, etc.

There is no specific information about Tabriz Bazaar before Islam and even up to the fourth century AH. The oldest references to the market go back to the writings of tourists during this period; This is what makes it the most historic market in the Middle East; But what made Tabriz Bazaar one of the most important markets in Iran and one of the important centers of trade in the past was its location on the Silk Road.  In general, the influence of Tabriz Bazaar in ancient times was such that the gates of this bazaar were considered as the main gates of the city.

Tabriz Bazaar in the Seljuk to Safavid eras

The name of Tabriz Bazaar, however, fell on the tongues from the Seljuk era. The paintings obtained from this period show that a building with the same function was located in the current location of Tabriz Bazaar; But when Tabriz was chosen as the capital during the patriarchal era, its market became very famous. At this time there were three main docks along the Silk Road, one in China, one in Iran and Tabriz, and the other in Rome. This fame and prosperity continued during the Safavid period and many cities near and far came here for trade.

Tabriz Bazaar during the Qajar period

During the Qajar period, the market maintained its prosperity and importance for two reasons and was the main artery of Iran’s exports to Europe; First, Tabriz was chosen as the crown prince’s city at this time, and second, it was closer to European markets. At the beginning of the thirteenth century and during the time of Abbas Mirza, Tabriz Bazaar had become a center of trade with the world; British traders brought their goods to Tabriz Bazaar via the Silk Road and after passing through the cities of Istanbul and Trabzon, and then distributed them throughout Iran. The volume of exchanges in the middle of the thirteenth century AH (Qajar period) in this market had reached a size that accounted for a quarter of the total volume of Iranian trade (more than the Tehran market). Most of the goods that the Europeans imported to Iran included mirrors, silk, velvet and cotton fabrics, cotton, Mosul chit cloth, sugar, glass, metal, and other machine products. In return, the Tabrizi’s sold them silk, some machine silk, weapons, tobacco, nuts, dyes, shawls, Mazo, and wax. Eventually, however, these deals ended in favor of the Europeans. 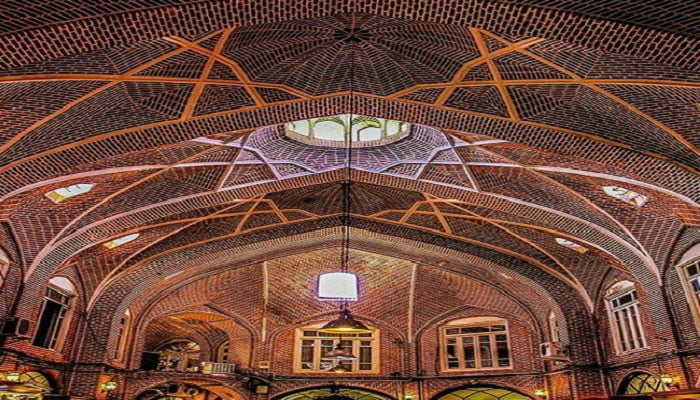 The main texture of Tabriz Bazaar consists of two covered rows, North-South and East-West. The width of the market is between 4 to 5 and the height of the roof is between 5 to 6 meters. The roofs of the rows are made of multiplicative and brick domes, which are very well suited to the cold climate of Tabriz. Above these ceilings, there are holes through which light enters the market environment and creates the same lighting conditions in the space. These vents are also suitable for market ventilation. When we examine the architecture of Tabriz Bazaar, we realize that the whole bazaar was not created in a codified form, but architects and designers have gradually added sections to it. 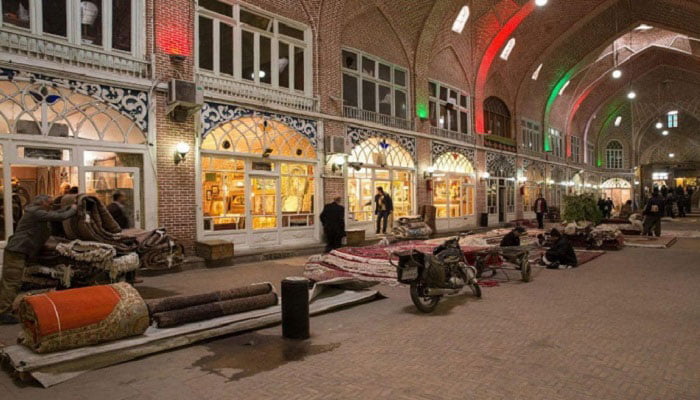 It is one of the most famous and beautiful Timchehs in Tabriz Bazaar. Timcheh Mozaffariyeh is one of the most important centers of carpet and carpet trade in East Azerbaijan province and the most exquisite and beautiful handmade carpets of Tabriz can be found here. Of course, in this part of the market, in addition to buying and selling carpets, cell owners are also engaged in designing and repairing various types of carpets and tablecloths. 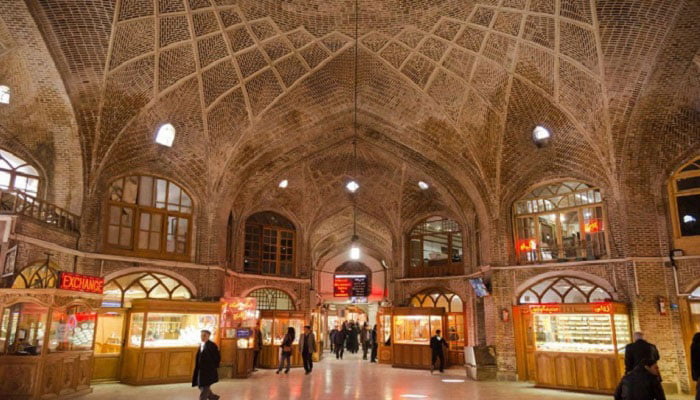 It is one of the largest corridors in bazaars and is located in the eastern and southern margins of the bazaar complex. Around Amir corridor is surrounded by two-story rooms and in the middle of it, a rectangular courtyard with dimensions of fifty by seventy meters can be seen. 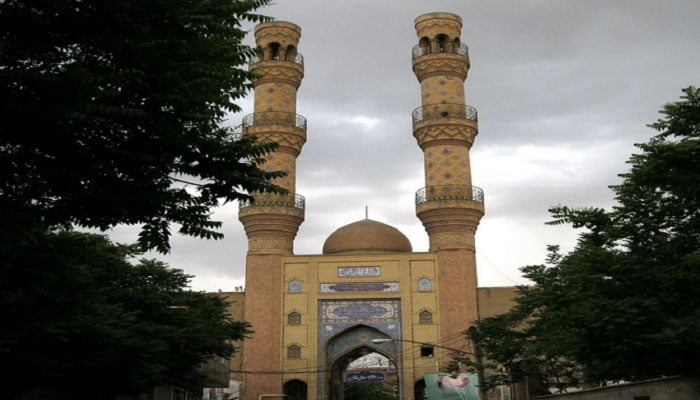 It is one of the historical and beautiful monuments of Tabriz. This mosque has been mentioned in old books as the Great Mosque and has been known as the Jame Mosque of Tabriz since its establishment. The Tabriz Grand Mosque is located at the end of the bazaar and is said to date back to the Seljuk period. 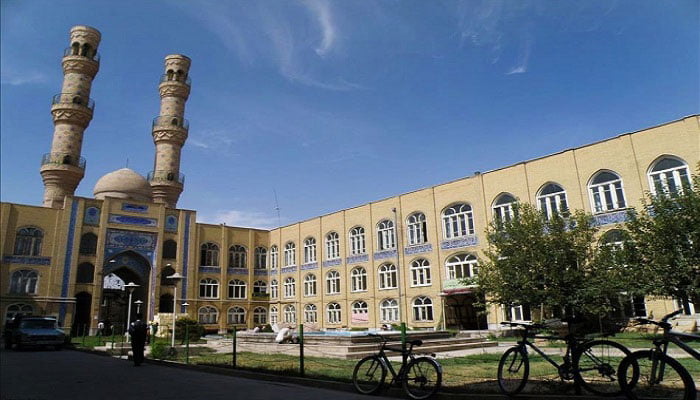 Talebieh Theological School is the most famous school in Tabriz Bazaar and great people such as Allameh Amini, Allameh Tabatabai, Allameh Jafari, Jafar Sobhani, etc. have studied in this school. To reach Talebieh school, you have to go to the Jame Mosque; Because this school is located next to this mosque. Talebieh School Library is one of the most famous libraries in Tabriz and holds more than 30,000 volumes of reference books and 350 volumes of manuscripts, stone, and lead.

There are 5 museums in Tabriz Bazaar, and in this section, we will introduce two of the most important ones: 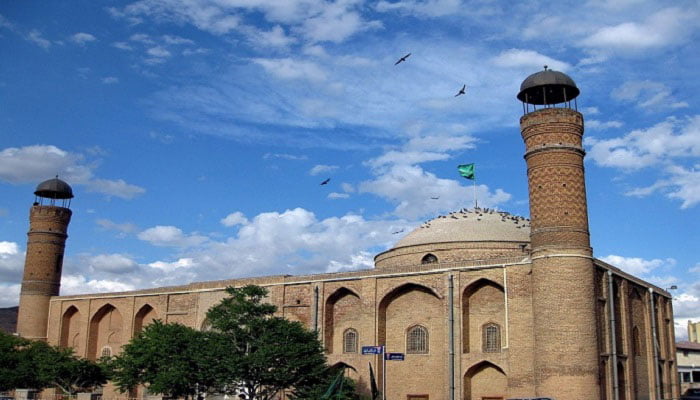 This museum is located in Daraei Street and in Shah Tahmasb Mosque and is considered one of the most important museums in Tabriz. A mosque that dates back to the reign of Shah Tahmasb Safavid and its construction is an immortal and spectacular work. In the Museum of Quran and Writing, you can see the collection of the Holy Quran, manuscripts, and pieces of works by famous Iranian calligraphers.

Museum of Bazaars and Jobs 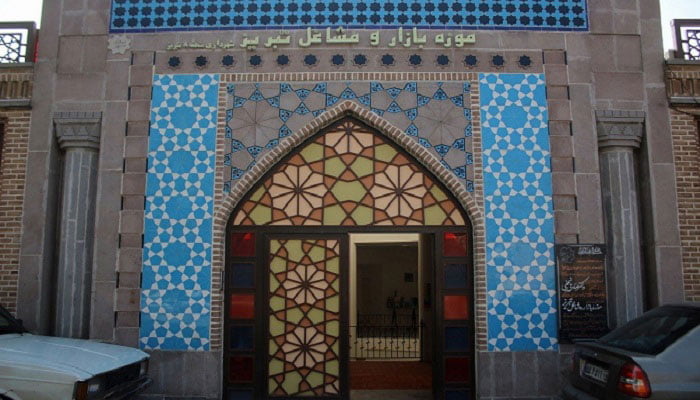 To visit this museum, you must go to the end of the bazaar and near Sadeghieh Glacier. A three-story museum where you can learn more about forgotten or forgotten jobs in Tabriz. The Museum of Occupations has a total of 11 booths, and among the professions introduced in it, we can mention blacksmithing, perfumery, traditional photography, and carpentry.

Is Tabriz Bazaar the largest indoor market in the world?