Niavaran palace was built in modern times by Mohammad Reza Pahlavi to house him and his family. The palace was originally a mansion for the Qajar kings, but later some of the smaller Niavaran gardens were demolished and the Niavaran palace was put into use in 1968, until the final hours of the Pahlavi family’s departure from the country where Mohammad Reza Pahlavi and his family lived. Niavaran Historical and Cultural Complex is located in Shahid Bahonar Square (Niavaran Square) in a large garden of about 11 hectares in the northern part of Tehran which enjoys a lot of natural and historical beauty and attraction.

History of the Garden

The Niavaran palace complex belongs to the Qajar and Pahlavi periods. Qajar kings first chose Niavaran Palace as a pleasant place to stay. Fath Ali Shah Qajar orders summer gardens outside of Tehran to build a garden for less than it is today. Mohammed Shah also built a small, simple building in the same garden, followed by Nasser al-Din Shah built the Sahebqaraniyah Palace in Niavaran Garden. The last building built during the Qajar era in Niavaran Garden is known as the Koushak of Ahmad Shahi. 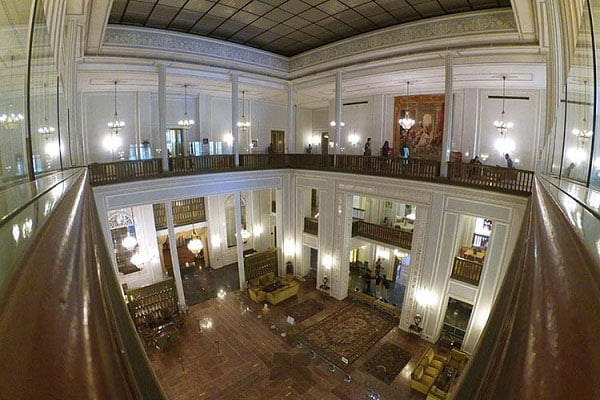 In the northeast corner of the Niavaran Garden, the Niavaran Palace building is about 9000 square meters in two and a half floors. In the time of Fath Ali Shah Qajar, a smaller palace was located at the present site of Niavaran Palace, which was demolished during Mohammad Reza Pahlavi’s and Niavaran Palace was replaced by it. The palace was originally designed as a royal residence and a courtyard for high-ranking guests but was assigned to Mohammad Reza Pahlavi’s residence and his family during executive operations.

The quadrilateral design of the palace and its interior architecture are inspired by Iranian architecture using modern technology. Its ornamentation is also a fusion of pre-Islamic and post-Islamic art. The floor is made of black granite stone and its roof is made of aluminum, which opens in the middle. The decoration and interior of the palace are designed and executed by a French band. The ground floor of the building comprises a large porch with all the rooms around it, including the private cinema, dining room, reception hall, waiting room, and aisles, as well as the Blue Hall. On the first floor of the building are the workroom, conference room and office of Farah Diba’s secretary and Leila’s bedroom. On the third floor are Mohammad Reza Pahlavi’s bedroom and midday resorts, Farah Diba’s makeup and dressing room, as well as the rooms of the Shah’s children.

At the end of the hallway, there is a room with stairs where formal and military uniforms and medals and medals of Mohammad Reza Pahlavi are kept. An exquisite collection of paintings by Iranian and foreign artists, porcelain and rosewater factories and decorative objects as well as exquisite Persian carpets, including the celebrity rug, adorn the spaces. 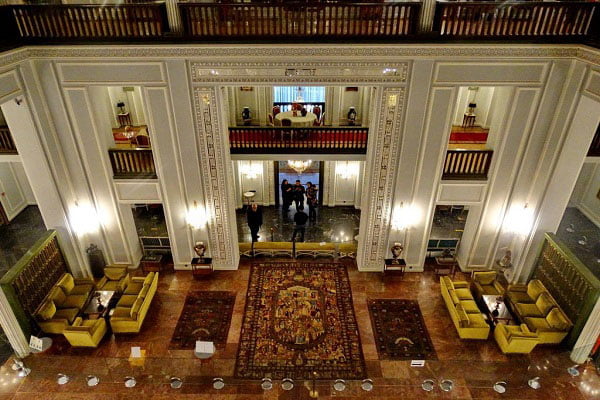 Carpet of Fame is one of the most beautiful and lasting carpets in the world, designed with 109 kings of Iran, 56 worlds famous and 16 pictures of Sassanid and Achaemenid carvings. The rug has a surface of 18 square meters and was designed by Hassan Khan Shahrokhi in 1920 and designed by Professor Ali Kermani. The margin of the carpet is an adaptation of the book “Ajm» “by the author of the opportunity of al-Dawld al-Shirazi, as well as some examples of the book being used in the carpet text and the names of the people beside it. In the lower part of the carpet, there is a picture of King Qajar Ahmad Shah.

The Royal Textile And Clothing Museum 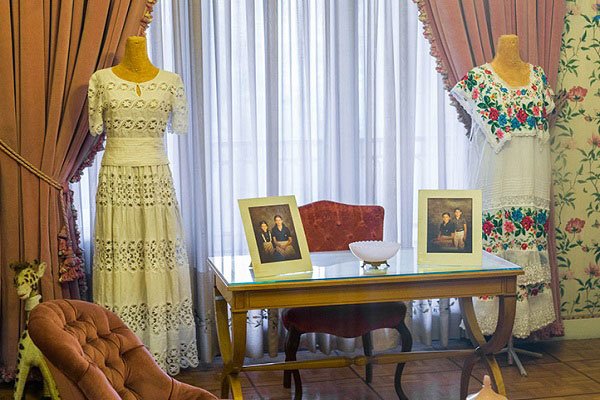 On the north side of the Niavaran Palace, is located on the south side of the Reception Hall, built during the Pahlavi period to accommodate court guests. Shortly before the Islamic Revolution, changing decoration and furnishing was in progress, stopping the project’s revolution as furniture and decorative items purchased in the hall, including dining tables and crystal jars, were exposed for the first time as a museum. Celebrations include a New Year’s Eve party, attended by former US President Jimmy Carter. 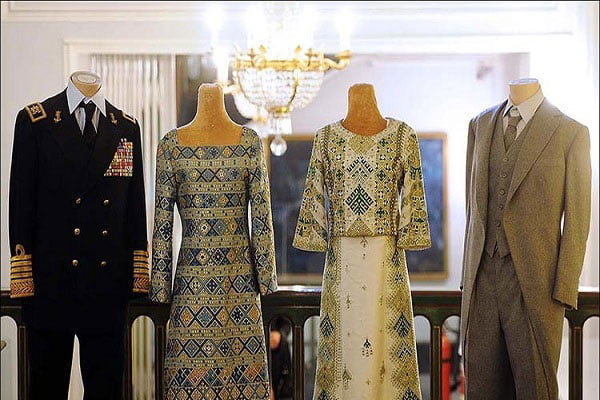 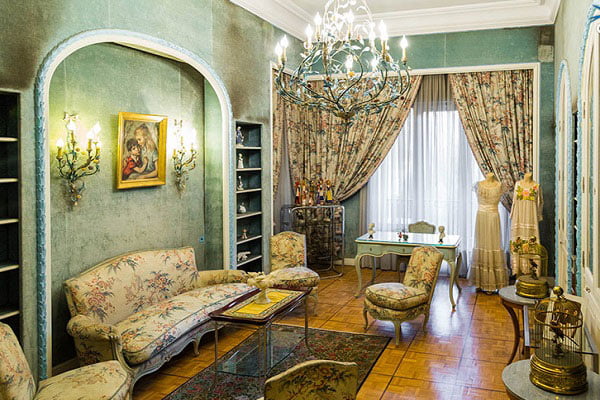 Because of the beautiful skyline facing the hall and the blue color of the walls and curtains, it was called the “Blue Hall”. The purpose of the museum was to create a large volume of exquisite woven, Pahlavi-era artifacts that could be exhibited with great artistic value, but due to lack of space in the main layout of the palace, it has not been publicly visited until now. The dedicated palace repository was maintained, and the Blue Hall with the appropriate space at Niavaran Palace could be the best space to display and introduce the works of the private palace reservoir, without altering the original layout of the palace. Among the measures taken to open the Royal Museum of Textiles and Clothing can be the selection, preparation, and maintenance of works on the works, the preparation of the exhibition space, the layout of the works, the creation of a visit path, and finally research on textiles and textile sewing techniques. Better introduction of the pointed objects. The height of the hall, the plaster decorations of the ceiling and the walls and the crystal chandeliers of the precious hall make everyone’s eyes glaze over, and the exhibited works have doubled the beauty of the space. Significant works of this space include two French Goebbels of the 17th and 18th centuries, which adorned the south side of the hall. 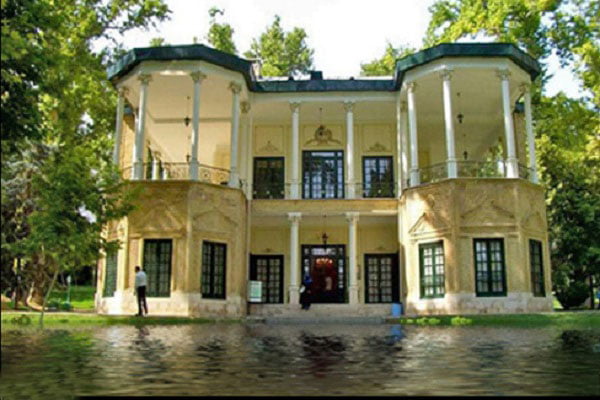 Koushk Ahmad Shahi mansion, late Qajar period, was built for Ahmad Shah bungalow in the middle of Niavaran garden with an area of over 800 meters on two floors with a gable roof. One of the main features of Ahmad Shahi’s Koshak building is the decoration and the brick facade used throughout its exterior. The bricks are molded with a variety of pea patterns. The entrance is on the south side of the building, leading to the staircase by several steps along the tiled oval pond. 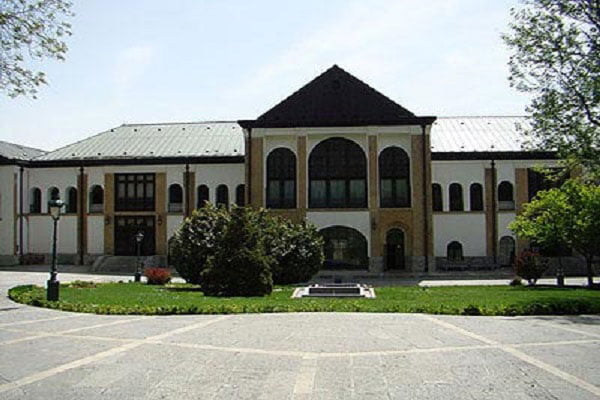 Nasser al-Din in 1267 AH ordered the construction of the Niavaran palace on two floors, including a loft, a seating area, a bathroom, and 50-40 units each containing 4 rooms and a porch for his wives. In the thirty-first year of his reign, he called himself the Gheran, calling the palace the “Sahebgheranieh Palace.” After him, Muzaffar al-Din Shah made changes to the building and demolished part of the harem. The Constitutional Order was also signed by him in the courtyard of the Saheb al-Qaniyah palace. During the first Pahlavi era, the Saheb al-Qaraniyah palace was rebuilt for the wedding of Mohammad Reza Pahlavi and Fawzia, but due to the severe cold that year, the ceremony was held elsewhere.

Further information about Iran’s Capital, Tehran and its historical sights:

Fun Places for the kids