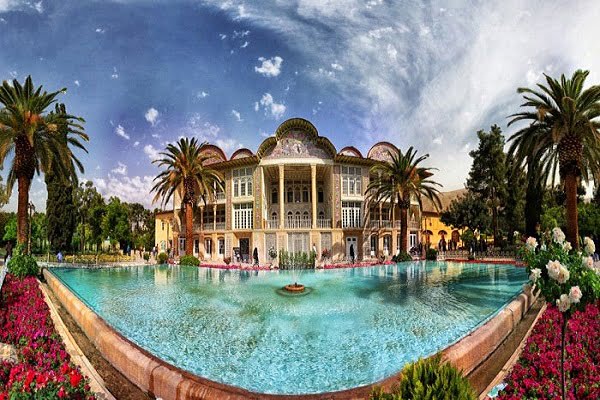 Speaking of the Eram Garden of Shiraz that comes up, the smell of spring orange comes to mind. One of the memories of traveling to Shiraz is this sightseeing tour of the gardens. Seeing some photos of Eram’s garden is enough to tempt you to visit this work and head to Shiraz.

In the northwest corner of Shiraz, the beautiful garden boasts a cold and warm atmosphere over the years that will fascinate viewers today and bring freshness to their moments. Its name is Eram Garden, located a short distance from the northern mountains of Shiraz (Babakuhi) and on the south side of it is the dry river of Shiraz which extends from east to west. This garden is one of the most beautiful gardens in Fars province and even the whole country, attracting many foreign tourists with its trees skyrocketing and roses blossoming.

According to many studies, there is still no information on the date of construction and early founding of the Eram Garden, but the existence of the name in the tenth and eleventh-century travelogues suggests that it existed at the time. Since the end of the Zandiyah period, for more than 75 years the Eram Orchard was owned by the Qashqai tribe leaders. A dynasty named Johnny Khan of the Qashqai dynasty of Fath-Ali Shah Qajar ruled over the Qashqai tribe with Ilkhani and Il-Beigi as their chosen headquarters in Shiraz. Johnny Khan, the first prince of the family, and his son, Mohammad Qoli Khan, erected a mansion in the garden and eventually completed the construction. In the early Qajar period, the former owners of the Eram Garden, some of the heads of the Qashqai tribe, were buried in a corner of the garden, but today no traces of them have been found.

Evidence suggests that the building of this garden was in existence until the time of Nasser al-Din Shah Qajar, but Haj Nasir al-Molk Shirazi bought the garden from the Ilkhanid dynasty and probably preserved the existing building in the garden by preserving the building.

After the death of Abu al-Qasim Khan Nasir al-Molk, the garden reaches to his son and then is sold to one of the leaders of the Qashqai tribe. After some years, the wife of the last king of Iran bought it and for a long time held it as a reception palace for the University of Shiraz. Instead of a garden wall, a short stone wall was built with iron fencing around it and decorations of various parts were restored. In addition to these repairs, extensive land was added. Interesting mirrors and oil paintings on the ceilings of the rooms and porches were also refurbished, and the landscaped garden was restored to its original design. The collapsed facade tiles were also re-installed to maintain the original style at the site. The entrance doors to the Eram Garden are to the north and Eram Boulevard and the smaller side to the west and the Triassic Mill Boulevard. These two sides of the garden have been in the past a stratum (clay wall), and today Amin al-Dawlah and the screws adorn its fences.

Much of this water, like most of Shiraz’s gardens, comes from a canal called Azam Creek. Water circulates in the pond and, after circulating in the pond, flows around the large pool and garden pathways to water the trees and plants. In addition to the water circulation system, two deep wells have been drilled in the garden to supply the water needed to irrigate the plants. 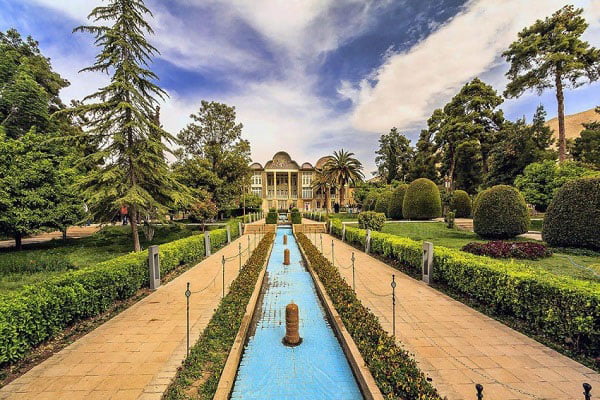 The 335-square-meter garden pool is in front of the main mansion and is likely to be built by Johnny Khan Ilkhani. At the four corners of the pool, there are four tall and beautiful Phoenix palms.

The main building of Eram Garden, Unique building in Iran 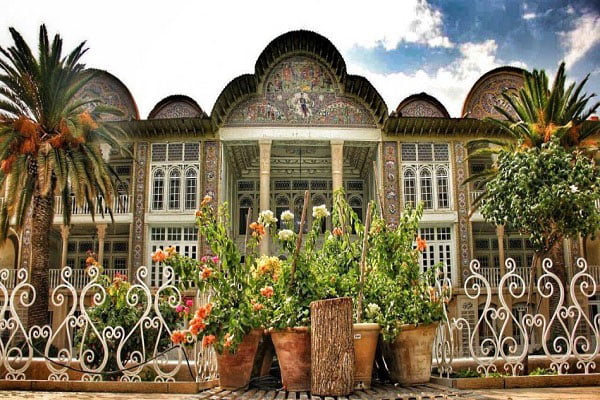 The main mansion of the Garden of Eram can be considered a relatively complete example of mid-Qajar buildings, with features that, like their other buildings, show Zandiyeh and Safavid architectural principles; The Safavid-era buildings have been imitated. The three-floor building is heavily decorated with a gable roof and is designed by Shirazi architect Haji Mohammad Hassan. Orient Eram Garden Main Building and architectural beauty, oil paintings, stone carvings, tiling and plastering, iron lattices, building fronts, stone columns, and exquisite wooden doors and inlaid masterpieces of Qajar industry and art. Another noteworthy thing is that the doors are made of teak, which is why they have remained intact for many years and have retained their original shape.

View of the building and its impressive decoration

What initially captivates every eye are the mansion’s seven-colored tiles, which are beautifully and elegantly stacked with exquisite designs and landscapes. The architecture of the orange building of Qavam Shiraz has similarities and its interior decorations, including picturesque wall and ceiling paintings, have many similarities to the Eram Garden mansion.  On the western side of the mansion’s windows are seven-colored tiles with various Achaemenid kings and soldiers, flowers and landscapes of gardens and palaces. Ultimately, it is Darius the Achaemenid and the leopard-hunting deer that stare at you. The two upper floors of the building have columns inspired by Persepolis and evoke its beauty and splendor.

At the front of the building, there are two semicircles on either side and a large panel, consisting of three crescent stones, known as the Persian architects, is known as Santouri. The crescent has three large panels and two small tiled panels with colored glazed tiles, featuring images of Nasser al-Din Shah Qajar, stories of Ferdowsi’s martial arts and ancient Persian literature and religious tales. In the largest crescent, the role of Nasser al-Din Shah is mounted on a white horse, while the crown is closed in front of his hat. Then there are three other roles in Ferdowsi’s and military stories, including Solomon and Queen Saba, Rostam Pahlavi, Khosrowshirin, and Yusuf and Zulikha. In the smaller crescent, a man battling a crescent painted with a distorted example of the eastern port of Sad sotun Persepolis. There is also a deer in the leopard claws on the Islamic background, which is termed and embraced by local Farsi architects.

The ground floor, located on the ground floor, is a crypt and a place to rest on hot summer days and has a pool hall. The hall has a water fountain, and a blue stream runs through it, leading to a large pool in front of the mansion, and in the middle of the hall is a carved stone pillar. Mosaic and seven-color tiles have covered the ceiling and walls of the basin, making it one of the finest examples of tile art in the Qajar era. These tiles are neatly intertwined and display beautiful images of hunting grounds and nature landscapes and the story of Khosrow and Shirin and other motifs.

On the second floor in the middle of the building, there is a large porch with two long columns and a flat roof, behind which is a large hall. In front of this beautiful porch are two long, unified stone pillars, and the role of the headstones reflects the image of men dressed in Qajar times and flowers and bushes. The two-column porch of the Eram Garden has a special privilege among the buildings of the Qajar period in Shiraz and similar buildings due to its beautiful plaster decorations on its three walls. The front porch of this porch and surrounding area is one of the most interesting tile works of the Qajar period, which is considered to be a unique specimen and cannot be seen in other buildings of the Qajar period.

On either side of this large porch are two small porches, each with two small integrated stone pillars, behind which are sashes and conceptions. On the south side of this floor and just above the lower floor there is another spacious and equally spacious kitchen. there are three iron windows that are old and have survived since the building was built. The two side iron windows are symmetrical and the middle window is larger in size. These windows are located at the entrance of the refrigerator and are interesting examples of Qajar period windows.

In the middle of the third floor, there is a large hall similar to the second floor with windows opening to the main porch. There are three more rooms and a large lounge on this floor. Like the second floor, there are two verandas on either side and just above the lower porches. The ceiling of these two halls is lined with wooden beams and regular boards and decorated with beautiful and exquisite paintings. The paintings include flowers and shrubs, Islamic designs, and numerous paintings of hunting grounds and women’s faces and images of European-style mansions. These motifs are one of the shreds of evidence that show that the fine art of painting on the ceiling or, as the fan says, Marjouk, was quite common in the Qajar period in Shiraz.

Coronavirus
Things You Need To Know