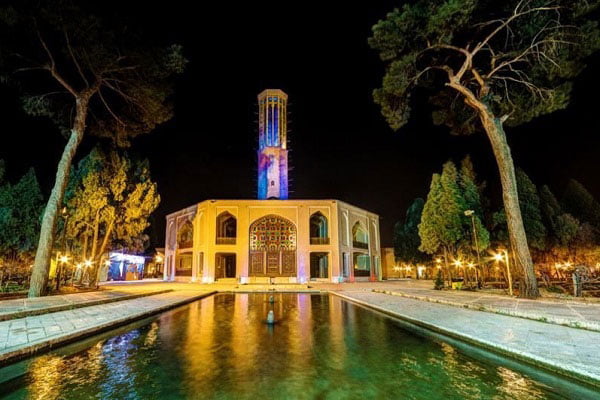 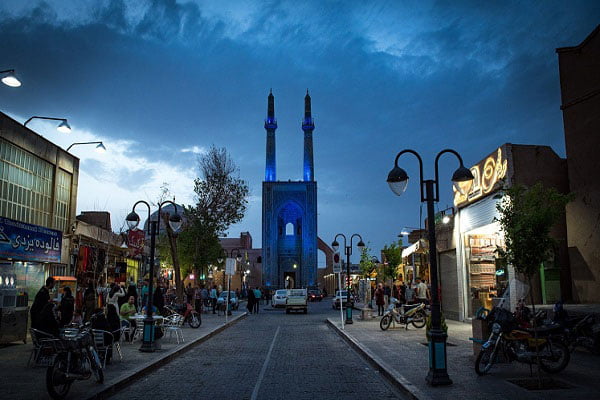 Yazd is one of the most ancient cities in Iran and has a very long history that does not fit in this article and we will provide a brief explanation.

Some geographers consider Yazd’s construction history to be the 14th Sassanid king during the time of Yazdgerd I, who believed that the city was called Yazd for this reason, and its origin comes from the word “Yazid” meaning Persian worship. Some experts say that Bahram Gaur, the fifteenth king of Sassanid, arrives in Kote (modern-day Yazd) on his way to Khorasan and, as his illness improves, he counters the blessing and commands that to develop it and create a beautiful city. Because he was doing this in the name of Yazdan, he ordered that the city be called “Yazdan Gard”.

After the death of Bahram Gur, Yazdgerd II sat on the king’s throne and after a while gave Yazd to his two sons, Shah Firouz and Shah Blass, to divide it among themselves. When Anushirvan, the twenty-second Sasanian king, came to power, he dedicated Yazd to his daughter and built many buildings there. After Anushirvan Khosrow Parviz became king and gave Yazd to his two daughters, Iran Dokht and Turan. Turan Dokht passed away after eight months, and Iran Dokht was chosen as his successor. He sent an envoy to Yazd called “Abrand” and ordered him to make a lot of development in the city, which made Yazd flourish.

Yazd Atabekan, one of Iran’s dynasties, ruled Yazd for nearly 140 years. At the time of Genghis Khan’s Mongol invasion of Iran, Yazd was under the control of the Atabakan dynasty ruled by Sultan Qutb al-Din. He quickly accepted the Mongol rule, and his successors remained in the hands of the Mongols in Yazd, adequately protecting Yazd from the Mongol anger. Yazd’s relative security and tranquility made it possible to flourish during this period of trade and exchange of various goods.

The following factors were involved in the development of Yazd commerce during this period:

During the reign of one of the kings of this dynasty named Yusuf Shah, the envoy of Ghazan Khan, the most famous, most powerful and influential of the Ilkhanid kings, came to him and faced with disrespect, his Ghazan army attacked Yazd and forced Yusuf Shah fled to Sistan. Yazdis stand up and go to Amaz Mohammad Abdaji, commander of the Ghazan army, with the ulama, preventing him from entering the city.  The importance of road, security and road widening has reached a point in the past that the Muzaffar dynasty settled on Yazd and Maybod roads. Amir Muzaffar, the eldest of this clan, served in the Mughal court of Ilkhan and was able to rule Meybod. This period is a turning point in the history of Yazd, as it for the first time cultivated a dynastic line within it that for more than half a century held important parts of southern Iran. There were many talents in Yazd and it came to be known as “Dar al-Alam”. Schools, mosques, and shrines were taught various sciences of the time, and Sufism flourished in Yazd.

A group of people, led by Haji Abdar, seized Yazd from the Timurid ruler and placed him on the throne of Sultan Muhammad, son of Abu Said. The rulers of Timurid, Isfahan, Nain, and Ardestan rushed to Yazd to reclaim this land but failed. Finally, the Persian ruler, Pierre Mohammad bin Omar Sheikh bin Timur, traveled to Yazd with a large army, and with the help of Sistan’s ruler, they besieged Yazd and eventually seized it. Tile work of Jame Mosque and Amir Chakhmaq Square and Amir Chakhmaq Mosque, Old Mosleh dates back to the Timurid era.

At the time of the emergence of Shah Ismail Safavi, various tribal governments were established in Iran and around forty independent and semi-independent rulers were active throughout the country. Shah Ismail conquered Yazd but inflicted enormous spiritual damage on the body of Iran, and especially Yazd, with excesses of religious fanaticism and untold massacres. Following these inappropriate behaviors, the supreme ruler Mohammed Korea invaded Yazd and conquered the area with the help of his relatives. Shah Ismail also failed to recover and later burnt down Yazd and burned him in Isfahan. During the reign of King Tahmasb, Nematollah Baghi, son of Amir Mirza Abdul Baqi, a prominent Sufi who was killed in the battle of Chaldoran, took King Ismail’s daughter to wife and became ruler of Yazd. He built a courthouse called “Abbasi” and built the Shah Tahmasb Mosque near Ba’ath Square.

After his death, his son, Mir Miran, took over Yazd, and for some time Mirza Shafi ruled the country. The prevalence of Iranian trade in the Safavid era, with a particular focus on silk and textiles in European markets, sent foreign traders to Iran. On the one hand, European merchants and on the other hand, Indian merchants traveled by land routes between Isfahan and Delhi, and Yazd became famous because of its silk and textiles and its position on the road. Things were going well until the Afghans invaded Iran and Mahmoud Afghani captured Yazd’s plan. The Yazidis did not stand their ground and led him by the hero of that era, Mirza Enayat Sultan. Eventually, Mahmoud Afghan abandoned Yazd and agreed to conquer Isfahan. The case did not end there, and Ashraf’s successor, Mahmoud, fell to the Yazidis for four years and fought for the sultan’s favor. He eventually intruded into the Enayat Sultan’s family with deceit and killed them all, with the exception of his nieces, Momeni Khan and Mohammad Taghi Khan.

Later on, Nader Shah Afshar was seated on the throne of Kerman by Nader Shah Afshar, and Muhammad Taghi Khan and his children took over Yazd until the late Qajar period. This family provided valuable services to the city and built many works and monuments including Dolatabad Garden, Khan School, Nasiriyah Garden, Khan Bazaar, Khan Square, Kaisariyeh Bazaar and so on.

During Zandiyah, the rulers of Yazd were people named Zayn al-Abidine Khan and after him Abdul Rahim Khan. Abdul Rahim Khan had a particular interest in the development of Yazd and established the Rahimabad farm on the outskirts of today’s Yazd. Abdul Rahim Khan’s school is also one of his works, now known as Hammat Primary School.

Agha Mohammad Khan Qajar Reached Muhammad Taqi Khan, who had previously ruled Yazd, came to power. His children followed the path of civilization and development in Yazd and did considerable work. Fath Ali Shah ruled Yazd as his son, Mohammad Wali Mirza. Only 32 years old, during his rule, he repaired and expanded some buildings. But following the death of Fath Ali Shah and before the official crown prince, Mohammad Shah from Tabriz reached the capital, he made his way to Tehran. He sat on the throne and called himself Adelshah, but after seven days he lost everything and was forced to flee to Russia. One of the events of the Qajar era was the establishment of the World Trade Bank by Khosrow Shah Jahan and his brothers, which provided the foundation for the establishment of the first Iranian bank.

With the Pahlavi dynasty, other buildings were built in Yazd, which brought more prosperity to the city, with some damage. The entrance of the cars and the construction of the streets was the most important factor in changing the shape and texture of the city; the streets of Yazd started with the construction of Pahlavi Street and twelve years later the Shah Street was constructed between the Amir Chakhmaq complex and the Shah Square. 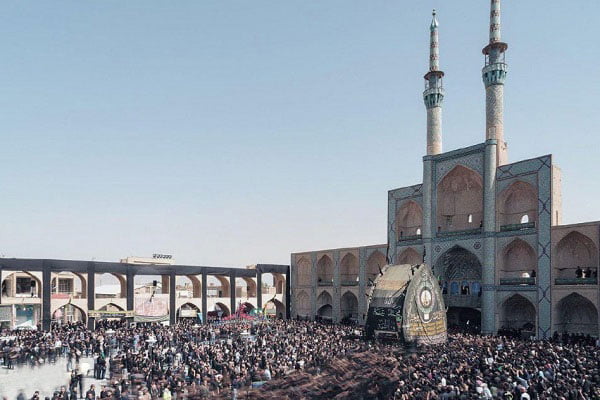 The most important Yazidi ceremony: One of the most important religious ceremonies of the Yazidis is the worldwide celebration of palm-tree worship, which has even touched foreign tourists. The palm tree is a wooden structure that symbolizes the coffin of Hussein bin Ali, the third Shiite imam, being raised by dozens of people on Ashura and other mourning days and circling the streets.

Embroidered Bag: it is one of the Ramadan ceremonies held during the night of 24 between noon and evening prayers. During this procedure, a piece of fabric is made and cut to the patient’s intention to sew.

Sadeh Festival, Zoroastrian ceremonies:  Religious rituals are not only seen among Yazd Muslims, and Zoroastrians also celebrate their beauty in this city. One of the most important Zoroastrian celebrations is the Sadeh celebration which is in the winter, which has a special place among the followers of this religion.